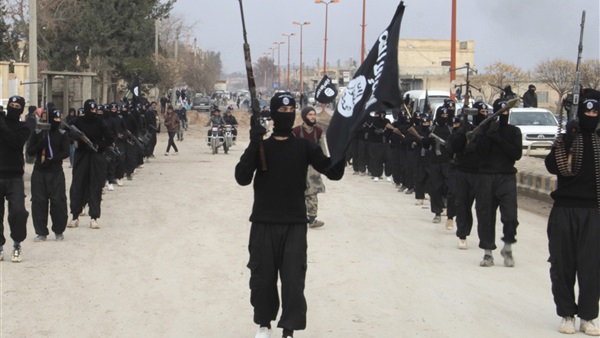 Paradise Square was once famous as the roundabout where Islamic State crucified and displayed the heads of its victims. Now it has a Nutella House café.

The café, newly built next to one of the bombsites that filled Raqqa four years ago, is just one symptom of the city’s stark change in fortunes.

Isis’s former capital, on the fringes of the desert where Mohammed Emwazi, known as Jihadi John, paraded his captives, was pummeled into submission by British and American missiles in 2017.

Today, its streets are packed, lined with new restaurants, and officials say its population has grown beyond its prewar numbers as Syrians flee violence and poverty elsewhere in the country to its relative security.

“The economic situation at home is terrible,” said Juneya Sayyan, who has moved to Raqqa with her children from a village near Damascus, which is firmly under the control of the Assad regime. “My house was destroyed in the war. There is no work there, and prices are sky-high. So we came here.”

She lives in a block of flats that, like 80 per cent of the city’s buildings, was partially destroyed in a coalition airstrike when the West’s Kurdish-led allies on the ground drove out Isis fighters.

Holes gape in the walls pockmarked by bullet holes, offering a glimpse of children playing in the ruined landscape. It is hardly ideal but it is safe, and here her family’s only son at least has a job to support them.

Working at a chicken restaurant earns him about $90 a month — hardly a fortune but almost double the equivalent job in Damascus. The capital is suffering from western sanctions and has experienced a collapse in its currency similar to that in neighbouring Lebanon, in whose failed banks many Syrians kept their money.

When Isis was driven out of Raqqa, it was after one of the fiercest military campaigns in modern history. The attacking army, the Kurdish-dominated Syrian Democratic Forces (SDF), had to fight from building to building to dislodge the Isis fighters, who were down to a hardened, fanatical rump after three years of war.

The SDF developed an extraordinary tactic with their British and American allies. As they advanced, they marked Isis outposts on computer pads linked to a central database. The co-ordinates would then be transmitted by allied headquarters directly to the jets’ missile guidance systems.

As a tactic, it saved many SDF lives. How many civilians died on the ground, trapped in basements under the Isis positions, remains hotly disputed.

What is not disputed is that the city was physically levelled in a way rarely seen even in modern warfare. The almost total destruction included schools, hospitals and basic services.

“When we arrived here there was no one,” Asma Habal, 36, who came from Aleppo, said. Her extended family was partly motivated by fear — some were wanted by the regime and other men would at least be called up for military service.

Her cousin, Ahmed Hamido, 26, came to join the conversation. He had been a journalist in rebel-held Aleppo when it was surrounded and barrel-bombed by the Assad regime, and would be an immediate target for retribution.

Much of Raqqa’s wreckage remains. There is still insecurity, with regular arrests of what the authorities say are Isis sleeper cells. But compared with the fighting going on in northwest and southern Syria, and the economic devastation in regime-held territory, Raqqa is starting to look good.

A report by Save the Children said it was possible the population was now higher than before the war. Mustafa Hamshu, a local tribal elder, said that the number of people in Raqqa province was several times larger.

The charity said that conditions were still poor, with more than a third of the city’s buildings in a state of ruin and families camping in the wreckage afraid of roofs literally falling in on them.

In addition, drought and a fall in the level of the nearby Euphrates is leading to disease, while schools have still not been rehabilitated. “Children are still living among ruins, with limited water, electricity, and access to education,” it found.

However, everything is relative. The families seeking refuge often have no homes to go back to; here the local authorities have granted them permission to stay in old council accommodation, even if damaged.

While the main Syrian Kurdish party, the PYD, has a reputation for authoritarian behaviour, it allows a greater degree of freedom than either the regime or the Islamist militia Hayat Tahrir al-Sham, which runs Idlib province in the northwest.

Safety also is understandably uppermost in the minds of the families here. Juneya Sayyan’s husband was killed in crossfire in a gun battle between rebels and the regime, and her eldest son disappeared into a regime prison nine years ago, never to be seen again. Asma Habal’s husband was killed by an Isis car bomb.

Even in SDF-run territory further north, Turkish forces shell positions occupied by Kurdish soldiers, many of whom are in effect the local affiliate of the Turkey-based guerrilla organisation, the PKK. Raqqa, though, is protected by the US presence and is anyway no longer fought over, perhaps not really wanted, by any of the other powers that have contributed to Syria’s destruction.

Another woman, Jihad Azo, said she had lost two grandsons, aged 10 and 11, during the siege of Aleppo, when the family home was bombed. As she cradled a baby granddaughter sitting in Sayyan’s first floor flat, the wall behind her lay open to the elements.

“Our homes here may be destroyed and open to the sky, but at least there’s shelter,” she said. “And we have our children in our laps.”