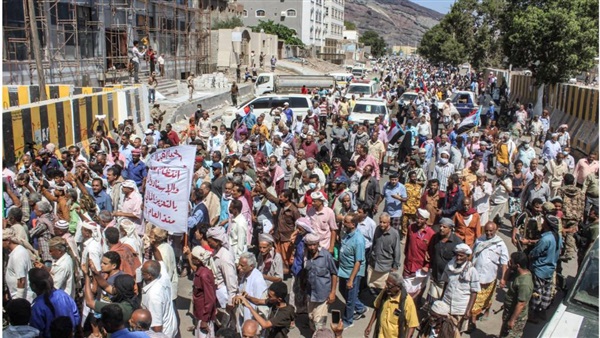 During the past few days, Yemeni voices, especially in the governorates under the control of the Brotherhood, rose to demand the prosecution of corrupt Brotherhood members for their crimes that caused the deterioration of the economic and living conditions of the Yemeni people, playing the same role as the Houthi coup militia, which ultimately confirms that both groups are two sides of the same coin, and the only loser is the Yemeni people.

Indeed, the citizens responded, and one day after the calls of the Southern Transitional Council, hundreds of demonstrators came out on September 13 in a popular sit-down in front of the Hadramawt provincial office to denounce the corruption of the Brotherhood, which is in control of the province, and the poor living and economic conditions. The demonstrators asserted during their protests that the Brotherhood stole the wealth of the south, drained its resources, and carried out plot after plot to humiliate the Yemeni people. They raised slogans that read “Brotherhood legitimacy imposes a tragic reality on the people of the south, while its leaders enjoy a life of luxury and bliss in hotels.”

On September 15, the provinces of Shabwa and Taiz witnessed massive protests to denounce the brutality and corruption of the Brotherhood's Islah party militias, as the demonstrators announced their rejection of the Brotherhood's looting of the provinces’ resources in order to support and strengthen terrorist organizations to be eventually summoned to Shabwa to intimidate civilians, assassinate elite members of the province, and kidnap opponents.

During the protests, a large number of demonstrators called on the leaders of the Arab coalition led by the Kingdom of Saudi Arabia to work for the implementation of the Riyadh Agreement, the sites between the Southern Transitional Council and the legitimate government, and to stop attempts to betray government interests in Shabwa.

Regarding the causes and fate of these protests, Dr. Mahmoud Al-Taher, a Yemeni political analyst, explained that corruption is eating away at all the facilities of the Yemeni state, specifically legitimacy, and this has had many consequences, the most important of which is the failure to manage the military and political process in Yemen.

In an exclusive statement to the Reference, Taher pointed out that the Yemeni citizens suffer from the political elites opposed to the Iranian project in Yemen, because everyone wants to achieve political gains, forgetting the citizens and their needs, which has caused a major economic crisis in the liberated areas.

Taher noted that the Yemeni government is benefiting from the current situation and is contributing to aggravating the economic situation. It is also making accusation against the Southern Transitional Council, with the argument being that the government cannot return to the liberated areas because of the Southern Transitional Council’s actions against it.

He added that the Southern Transitional Council is also calling for demonstrations, and it controls all political and economic decisions in the temporary capital, Aden, adding that Saudi intervention is needed to impose the implementation of the Riyadh Agreement on the parties opposing the terrorist Houthi militia backed by Tehran.