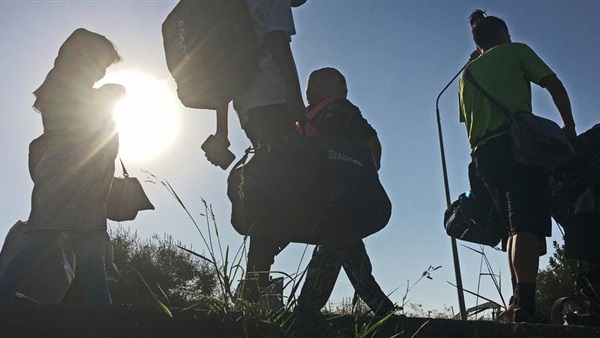 Juliet Sadoun had never heard of Belarus when her family told her they had seen a post on Facebook advertising a guaranteed route to Europe via Minsk. For just €5,000, a flight and a short walk, it promised, she could travel from the Iraqi displacement camp where she lived to a new life in Lithuania, an EU member state.

Sadoun, an artist and member of Iraq’s persecuted Yazidi minority, was about to become an unwitting pawn in what Lithuanian officials say is a plot by Belarus’s autocratic leader to destabilise the region by flooding his EU neighbours with thousands of migrants from Iraq and Syria in revenge for European sanctions.

The offer had seemed almost too good to be true: a route to Europe that required no boats, lorries or fake passports. Two months ago she flew from Baghdad to Minsk with her younger sister and other would-be migrants.

From the airport they were taken to a hotel in the Belarusian capital by an Arabic-speaking man and several colleagues, who presented themselves as tour guides. A few days later, a driver — arranged by the smugglers — took the group by bus towards the border. After two hours, he dropped them off in a forest near the frontier and told them to walk. Together, the small party of Iraqis went into the woods, using the maps on their phones to aim for Lithuania.

“It was really scary,” Sadoun said.

For seven hours they walked through the thick, dark forest. They soon lost their internet connection and had no idea which way they were going. By luck, they wandered into Lithuania, where they were met by police, who took them to a registration centre. It was the first time anyone had tried to stop them. The only sign that they had passed a border was the small chain-link fence — about a metre high — that they had stepped over on the way.

Lithuanian officials say that Belarus’s president, Alexander Lukashenko, who has repressed the mass protests that erupted after he claimed to have won widely disputed presidential elections last year, has “weaponised” migration, calculating that it would overwhelm EU resources and stir up nativist sentiment, undermining the power of European governments.

The Belarusian government denies the allegations.

He has bound himself tightly to the Kremlin. Last week Russia and Belarus began large-scale combined military exercises, unnerving European and Nato officials. According to Tass, a Russian state news agency, the exercises will involve more than 200,000 servicemen, 80 aircraft and helicopters, 290 tanks and up to 15 ships.

Recently Lukashenko’s efforts to quash dissent have reverberated beyond his country’s borders. In May Belarus forced a Ryanair flight to land in Minsk, citing a bomb plot, before kidnapping Roman Protasevich, a journalist from a popular opposition outlet who was on board. Lukashenko has also threatened to allow migrants and drugs to flow into Europe if sanctions were imposed on Belarus as a result.

Despite his protests, the sanctions came. So did his response. By mid-July, Belarus had granted visa-free entry to 73 countries, and sharply increased the number of flights from Iraq to Minsk.

The effect was almost immediate. This year, more than 4,100 irregular migrants have been stopped after crossing into Lithuania from Belarus, compared with 74 last year. Many, like Sadoun, were Iraqis who had flown over after seeing the route advertised online.

Research by DebunkEU.org, a Lithuanian disinformation analysis centre, showed that at around the end of March, a large number of Iraqi travel agencies sprang up online, offering trips to Belarus. With them came more than 100 pages and groups on Facebook that offered advice on how to cross the border to Lithuania, with many users claiming that the border was open from the Belarusian side. Some of the pages have now been taken down.

“Lithuania, Poland, and Latvia have most actively supported Belarusians in their pursuit of freedom and justice after the 2020 rigged presidential election,” said Sviatlana Tsikhanouskaya, a Belarusian opposition leader. “This is an obvious attempt to inflict damage on them, to undermine their internal stability.” She added: “Since these three countries are also in the EU, Lukashenko believes that this orchestrated migration would force the European Union to reconsider economic sanctions against him.”

The recruitment efforts were allegedly encouraged and enabled by the Belarusian regime. According to research by Dossier Centre, an investigative group, and the German magazine Der Spiegel, a Belarusian state travel company — part of the office of the president — collaborated with an Iraqi travel company to issue hundreds of tourist visas to Iraqis with the intent to funnel them across the border into Lithuania.

Many of the visas — even those issued for children — were for hunting trips. The state travel agency denied all allegations.

The crisis has gripped Lithuania, a small country that has been one of the most vocal opponents of Lukashenko’s regime, and has given political refuge to much of the Belarusian opposition.

After a flurry of aid from the EU and Nato, the country’s border with Belarus has been secured with drones, infrared cameras and a 13ft razor wire-topped fence, which Lithuanian officials aim to extend for 315 miles along the 420 mile border — though for now only 12 miles have been completed. Parts of the frontier are marked only with low wooden fences or streams.

Direct flights from Baghdad to Minsk have been paused after frantic diplomatic work backed by Lithuania’s most influential Nato allies. The European Commission last month said it was giving £31 million in emergency assistance to Lithuania to ease the situation at the border and improve reception capacity, including medical care and Covid isolation facilities.

Dozens of officers from Frontex and other EU agencies, including translators, border guards and helicopter pilots, have been deployed to Lithuania’s aid.

But although the flow of people has slowed, there are still thousands trying to cross from Belarus to Lithuania, Latvia and Poland. Videos published this month show Belarusian forces using riot shields to push a group of migrants into Lithuania.

This month Poland declared a “state of emergency” on its border with Belarus. It has been criticised by opposition politicians, who accuse the government of attempting to cover up a policy of pushing people seeking asylum back across the border — which is illegal under international law. Authorities say they are protecting the security of citizens and public order.

Arnoldas Pranckevicius, deputy foreign minister of Lithuania, described Lukashenko’s tactics as a textbook example of a “hybrid attack”: a threat that is difficult to track and characterised by its deniability, and in which the true participants — in this case the Belarusian state — are hidden.

“It’s very difficult to track who is in charge, what is going on, who is behind it,” he said. “And they’re using human beings, they are using migrants as a tool and at the same time trying to deny their responsibility and hide traces of involvement of the state and non-state actors.”

Lithuania, he said, was being targeted because it had taken a strong stance against the regime.

“We see it as an act of revenge first, and second as an attempt to change our active and principled foreign policy position,” he said. “The third goal could also be to divide society from within to create internal tension in terms of domestic political debates and public opinion.”

Yet as the EU and the US unite against Lukashenko, bombarding the regime with sanctions, it remains unclear whether there is any effective legal recourse to counter his attempts to weaponise migration.

If it is proven that representatives of the Belarusian authorities were complicit in facilitating illegal border crossings, then they could be prosecuted under Latvian, Lithuanian or Polish laws. However, Belarus would be very unlikely to extradite the suspects. It has a track record of ignoring rulings by the UN human rights committee and has never agreed to be under the supervision of either the European Court of Human Rights or the International Court of Justice.

Russia, which strongly supports Belarus, could be expected to reject any attempts by the UN security council to influence the situation, including by referral of cases to the International Criminal Court, said Kanstantsin Dzehtsiarou, professor in human rights law at Liverpool University, who is from Belarus.

“Politically it’s very difficult because Putin is backing Lukashenko,” he added. “That means that initiating some legal instruments might be politically impossible: legally quite possible, but politically not.”

For the migrants themselves, the machinations of geopolitics and international hybrid warfare seemed very far away. Upstairs in the old school in Verebiejai, a hamlet 35 miles from the Belarusian border, Sadoun and her sister sat with a small group of other Iraqis — most of them Kurds and Yazidis — huddled in jumpers and jackets against the cold, damp air. All had jumped at the opportunity to travel to Europe after seeing the route advertised online.

At the camp, they were given three meals a day, and beds to sleep in. But they were not allowed to leave, or to work, while their asylum applications were being processed. None knew whether they would be accepted, or, as has already been the case for dozens of applicants, rejected and deported.

Armed guards were posted around the perimeter fence, which was hung with laundry. As they waited for the outcome of their asylum applications, all were clear on one thing: whatever political machinations led them here, so far, the journey had paid off.

“We just want our freedom, to go out like anywhere else and find a job,” Sadoun said. “Just anywhere that’s safe.”

In an email, an official from the Belarusian embassy in London said that the allegations in this article were “not true”. They offered no alternative explanation.