My family is starving, I have to sell my daughter 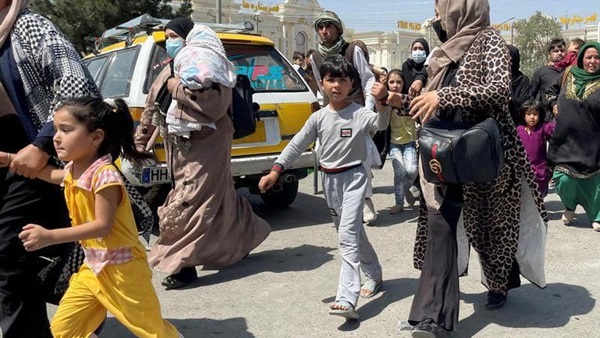 few items of Afghan lives are left unsold in Jada-e Maiwand. So fast is the rush to sell and flee or, more simply, to sell and survive amid the plug-hole gurgle of the country’s diminishing economy, that the heaving bazaar of personal belongings has spilt from its usual confines along the famed thoroughfare in the centre of Kabul’s commercial quarter and extended in a sprawl along the banks of Kabul River.

Nevertheless, among the shouts of dealers hustling to bang down the prices asked by desperate Afghans who had come to sell everything they owned, I was surprised to learn a four-year-old girl was being bartered too.

The value of the afghani has tumbled since the Taliban seized Kabul on August 15 but, according to yesterday’s near-record low exchange rates, a pawnbroker was offering about £170 for the child. Her father, a broken police officer trying to ward starvation away from a family of seven, was holding out to pawn his daughter to a shop owner for about £420.

“I would prefer to die than be reduced to selling my daughter,” the policeman, a 38-year-old whose name was Mir Nazir, told me. “But my own death wouldn’t save anyone in my family. Who would feed my other children? This isn’t about choice. It’s about desperation.”

Close to tears, he explained the bitter mechanics of his family’s economy as crowds jostled to sell and buy the possessions of each other’s lives at prices so low that several dealers I spoke to said they daily saw people cry.

Mir Nazir had lost his job with the police in the city of Ghazni and fled to Kabul with his wife and five children days before the Taliban seized the capital. Now he was a bazaar porter with a barrow. His rent outstripped his wages. The family were hungry, and there was no relief in sight.

“I received an offer from a shop owner, a man I knew who had no children,” he continued. “He offered 20,000 afghanis for my daughter Safia to live with him and start working in his shop. If I ever get the 20,000 afghanis to buy her back, he said I could. But I can’t sell my daughter for that low a price, so I asked for 50,000. We are still discussing. She may have a better future working in a shop than staying with me, and the price may save my family.”

While the outside world fulminates over the rise of the Taliban, the chaos of the evacuation and the shame of the US-led withdrawal, Afghans have already moved on to confront a far greater threat they face: abject poverty and the spectre of starvation.

The Afghan economy, already sick before the denouement of the Kabul government and victory of the Taliban but kicked off a ledge since foreign donors froze cash lines last month, is in a state of all-out collapse.

The World Bank halted aid to Afghanistan on August 25. A week earlier the International Monetary Fund blocked access to $460 million in emergency reserves, and since abandoning Kabul the US has blocked about $7 billion in Afghan central bank reserves held in US institutions.

An international agreement between more than 60 countries and Afghanistan to give Kabul $12 billion over the next four years is also in jeopardy as donor nations have bridled at recognising the hardline Taliban government that was announced on Tuesday evening, which included 33 mullahs and four men under US sanctions.

For a country with a cash-based informal economy in which 75 per cent of public spending is dependent on foreign support, the severing of foreign cash lines has been catastrophic. Food prices have risen and hundreds of thousands of security sector and government workers are unemployed.

“We are relieved that the war and fighting have ended,” Mir Nazir continued, “but we are all facing a new enemy: poverty. To work, without ever having enough to pay the bills, and come home to see your wife and children getting hungrier as you slide daily into worse debt without any hope that things will get better is a form of pain and worry as bad as the war.”

After being closed for a fortnight most Afghan banks have reopened, withdrawals from ATMs are limited to £145 per week, and the long-term economic picture is dire.

The former governor of the country’s central bank, Ajmal Ahmady, who held his position until the Taliban takeover, said last week that the freezing of the international cash line meant the Taliban had access to a tiny fraction of the nation’s reserves.

“We can say the accessible funds to the Taliban are perhaps 0.1-0.2 per cent of Afghanistan’s total international reserves,” he tweeted. “Not much.”

In an article published by Bloomberg yesterday Ahmady also observed that analysts who suggested China and Pakistan would become Afghanistan’s financial supporters were unrealistic, as Afghanistan and the central bank were likely to be sanctioned entities.

The country’s physical cash supply is dwindling as the printing firms that produce afghani notes abroad, notably Poland and France, are probably unable to deliver the billions of afghanis agreed in existing contracts.

Not everyone is miserable. Overseeing the destitution of their fellow Afghans, the dealers in the bazaar along the Kabul River admit they have never had it so good, and most talked about a 50 per cent profit rise since August 15.

“Peak business in terms of price was when the Americans ran the evacuation flights from Kabul airport,” said Baider, a 50-year-old trader, as a van laden with the belongings of a former intelligence officer pulled up behind him. “People were selling everything they owned to me at crazily low prices, just for the cash to take on an evacuation flight. I was offering them 75 per cent less than I usually would for household goods — and they’d take it.”

He added: “That frenzy has eased. Some people are still selling their belongings to us so they can flee to Iran or Pakistan, but most just sell for the cash to survive.”

Whatever the dilemma facing the international community over how best to deal with the Taliban, bankers, economists and the UN are all in accord in predicting that the messy US withdrawal was just the trigger for a wider set of crises now facing Afghanistan.

Caught in the centre of the storm, the former policeman who was on the verge of pawning his daughter said: “Don’t think I am any different to you. Don’t think I didn’t love the baby child I brought into the world and have loved her ever since, don’t think I am not distraught at the thought of selling my daughter — I just can’t see what else I can do.”