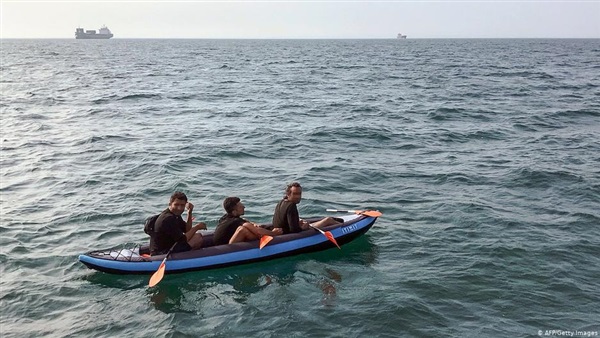 . Priti Patel has told MPs that she is ready to withhold millions of pounds promised to the French to block migrant crossings after a record number of people were estimated to have landed yesterday.

The home secretary is said to be furious at the low numbers of migrants being intercepted before they reach British waters since she agreed to pay France £54 million to double its patrols.

She met Conservative MPs last night to try to quell their anger. Patel blamed the French and said she was prepared to pull the funding promised less than two months ago if they failed to stop three in four crossings by the end of this month, The Times has learnt.

Patel told the MPs: “We’ve not given them a penny of the money so far and France is going to have to get its act together if it wants to see the cash. It’s payment by results and we’ve not yet seen those results. The money is conditional.”

The Home Office has yet to confirm the final number of migrants who crossed the Channel yesterday. But government sources said it was likely to be close to 1,000, breaking the daily record of 828, as people smugglers took advantage of the fair weather.

If confirmed, it would take the total number of crossings to more than 13,500, dwarfing the 8,420 who crossed last year, then a record figure.

Unconfirmed reports from witnesses in Dover suggested that more than 1,000 people may have crossed. The calmer weather attracted 158 crossings on Sunday, after more than two weeks without any small boats being detected. Bad weather was seen as the cause.

The previous daily record was set on August 21, when 828 migrants crossed. On the same day the French prevented 193 further crossings, less than a fifth of the total number attempted.

Since the £54 million deal was struck on July 21 to double French patrols, more than 3,500 migrants have reached Britain. The French have stopped less than half that figure, according to Home Office sources.

Patel is planning to confront her French counterpart, Gérald Darmanin, over the issue at a G7 meeting she is hosting in London this week. She is expected to decide whether to pay the French the £54 million by the end of the month. She could hand over part of the cash, with the remainder paid on condition of improved results.

Government sources said that the target for the French would be preventing at least 75 per cent of crossings. “The interception rate has to get to a certain point to act as a deterrent,” a source said.

Allies of Patel said she would not want to go into the Conservative Party conference at the beginning of next month with the migrant surge hanging over her.

Home Office officials have expressed frustration at the French for refusing to fly surveillance aircraft along the coast at night, when smuggling activity is at its highest. It is understood that the small planes cannot be used in the dark because of safety concerns in France. French police have also been unable to deploy drones provided by Britain because of French privacy laws.

French interception rates trebled after a similar deal to increase patrols in November last year, with more than 8,000 migrants stopped by August. The Home Office said that up until the spring, the French were catching about three in four small boats attempting to cross the Channel. Since then the interception rate has dropped off. On average, the French are intercepting less than two in four crossings.

Among migrants brought ashore by Border Force vessels yesterday were a baby and several young children. A packed lifeboat was seen arriving on a beach in Dungeness in Kent. Three white coaches parked near by were understood to be waiting to take the migrants to the reception centre in Dover.

A video of an abandoned inflatable boat washed up to shore at Kingsdown, Kent, was shared on social media.

Witnesses described Border Force, and the RNLI as being busy. One said: “It looks like the authorities have been overwhelmed today.”

Enver Solomon, chief executive of the Refugee Council, said: “The government needs to recognise that while there is war, persecution and violence, people will be forced to take dangerous journeys to seek safety.

“We are talking about ordinary men, women and children who are forced to flee their home through no fault of their own. The odds are stacked against them but they struggle on to survive.

“The government must change its approach and instead of seeking to punish or push away people seeking safety because of the type of journey they have made to the UK, they must create and commit to more safe routes. As a country, we can save lives and empower people, who have already been through so much, to give back to the communities that welcome them.”

Dan O’Mahoney, the UK’s clandestine channel threat commander, said: “This unacceptable rise in dangerous crossings is being driven by criminal gangs and a surge in illegal migration across Europe.

“We’re determined to target the criminals at every level, so far, we have secured nearly 300 arrests, 65 convictions and prevented more than 10,000 migrant attempts.”

“But there is more to do. The government’s new plan for immigration is the only credible way to fix the broken asylum system, breaking the business model of criminal gangs and welcoming people through safe and legal routes