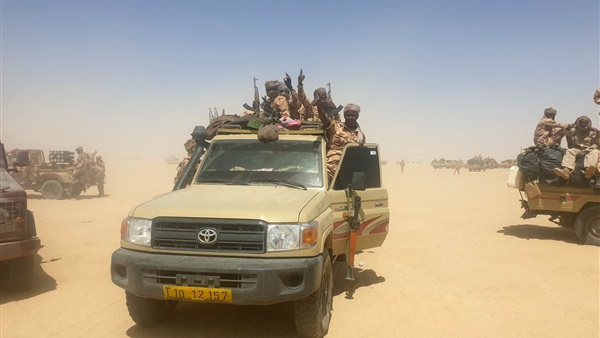 The recent period has witnessed diplomatic moves by Chad to several countries after its decision to withdraw 600 out of 1,200 soldiers from its forces stationed in the border triangle area between Niger, Burkina Faso and Mali, calling for a comprehensive national dialogue with the aim of achieving more national consensus and unity in order to hold presidential elections in the country.

In the same context, Sudanese Sovereignty Council Chairman Abdel Fattah al-Burhan received on Sunday, August 29, the chairman of the Transitional Military Council in Chad, Mahamat Idriss Deby, where the two sides discussed ways to strengthen relations and cooperation in the field of combating terrorism and securing the extended borders between the two countries.

Burhan stressed the need for “cooperation to confront the challenges facing the two countries represented by terrorist and extremist groups,” noting the importance of activating the security cooperation agreement signed between Sudan, Chad, Libya and Niger in N'Djamena in 2018 to secure the borders.

For his part, Deby expressed his country's desire to cooperate with Sudan to face challenges, adding, “Our country is going through a transitional period, and we hope for support from Sudan, as it is a neighboring and friendly country to us.”

He stressed the need to activate the joint cooperation agreements between the two countries, noting that the experience of the joint forces is a model for this cooperation and calling for its development.

Deby also stressed the importance of integration, concerted efforts and joint cooperation with the African Union in the field of border security and combating terrorism and cross-border insecurity.

On Thursday, August 26, Deby suggested “reviving the quadripartite agreement between Libya, Sudan, Niger and Chad” by forming a joint military force on the border with Libya.

During a visit paid by Libyan Presidential Council Vice President Musa al-Koni to N'Djamena, considered the first since the killing of Chad’s late President Idriss Deby, Mahamat Deby said that his country “supports the initiative to revive the quadripartite agreement between Libya, Sudan, Niger and Chad through the formation of a joint force on the length of its borders.”

“Our country is strongly committed to playing its role in helping the Libyan people, but in return, Chad strongly hopes that the mercenaries and armed gangs roaming Libya will not destabilize the neighboring countries,” Deby added.

On the other hand, Koni said, according to the Chadian presidency, “The Libyan forces are now fighting a relentless fight against these armed mercenaries.”

These moves come after Mahamat Deby issued a decree on August 13 to form a technical committee whose mission is to prepare for the participation of politicians and opposition armed movements in an upcoming comprehensive national dialogue, which will lead to the organization of presidential and legislative elections, the first since the killing of Deby’s father, late President Idriss Deby.

According to the decree, this technical committee is a body responsible for conducting negotiations and preparing for the participation of politicians and military personnel in the comprehensive national dialogue by identifying the participants, communicating with them, determining the conditions and terms of their participation, and agreeing on the dates and venues of the meetings, as well as potential host countries for the stages of the national dialogue.

The decree clarified that this committee will work under the direct supervision of the head of the military council, and that it is made up of a chairman and members to be chosen from among personalities with experience and deep knowledge of Chadian society, and that they will be appointed by a presidential decree.

The decree also indicated that the committee will work in accordance with the same rules and principles that govern the organizing committee for the comprehensive national dialogue.

In a research paper presented by researcher Ahmed Askar at the National Center for Middle East Studies, he confirmed that the repercussions of the call for national dialogue in Chad are as follows:

- The desire to end military operations against the rebels to prevent the depletion of the capabilities of the Chadian military forces and to put out the flames of clashes between Chadian tribes in the east and south.

- Attempting to calm the home front and maintain the security of the country without descending into civil war and security turmoil, with the aim of directing attention to confronting terrorist organizations that threaten the security of Chad and the region, such as al-Qaeda and ISIS.

- To stop the hostile attacks by rebel groups in the northwest of the country and to secure the common border with Libya to ensure the prevention of weapons smuggling or the infiltration of terrorist elements into Chad and then extending to the Sahel region.

- Securing the country's oil and mineral resources from theft and looting in light of the deteriorating security situation in some areas of the country.

- Preparing the country for the upcoming presidential elections.

- Attempting to improve Deny’s image both at home and abroad as a man of the stage and a man of peace in preparation for his possible candidacy for the upcoming presidential elections in the country.

- Reassuring Chadian public opinion about the future of the political process in the country and trying to contain the opposition political parties and entities in the country to prevent the escalation of criticism of Deby and the transitional authority.