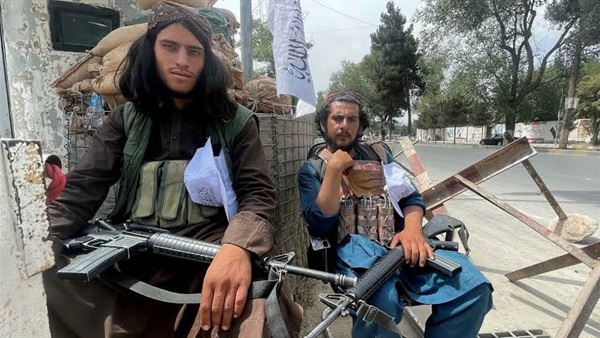 Foreign Office staff left documents with the contact details of Afghans working for them as well as the CVs of locals applying for jobs scattered on the ground at the British embassy compound in Kabul that has been seized by the Taliban.

The papers identifying seven Afghans were found by The Times on Tuesday as Taliban fighters patrolled the embassy. Phone calls to the numbers on the documents revealed that some Afghan employees and their families remained stranded on the wrong side of the airport perimeter wall days after their details were left in the dirt in the haste of the embassy’s evacuation on August 15.

The fate of Afghans who worked alongside western diplomats and troops, and who may face reprisals after being left behind, has become an emblem of the West’s retreat from Afghanistan.

Such was the British surprise at the speed of the capture of Kabul that the embassy’s evacuation protocols, necessitating the shredding and destruction of all data that could compromise local Afghan staff, their families or potential employees, appear to have broken down. The discovery of the documents comes after Dominic Raab, the foreign secretary, rejected a request to speak with his Afghan counterpart to discuss the evacuation of interpreters who worked for Britain two days before the fall of Kabul. It suggests that staff at the British embassy were careless with the lives of Afghan employees in the rush to save their own.

The documents included the name and address of a leading member of the embassy staff in Kabul, other staff members and their contact details and the CVs and addresses of applicants for jobs as interpreters.

Calls made by The Times to numbers on the abandoned documents revealed that although some of those listed had been evacuated to the UK in the past few days, other embassy staff had been left behind. Among them were three Afghan staff and eight family members, including five children, stranded among the crowds unable to access the British-held sector of the airport. “Please don’t leave us behind,” said one man in the group.

In a series of communications with senior Foreign Office officials inside Kabul’s Hamid Karzai international airport, the details of these missing staff were handed over and their rescue co-ordinated. However, the fate of at least two job applicants for positions as interpreters with the British, and whose contact details were left scattered in the embassy grounds, remains unknown. “During the drawdown of our embassy every effort was made to destroy sensitive material,” the Foreign Office said last night.

Reacting to the revelations this morning, Ben Wallace, the defence secretary, said the blunder was “not good enough” and would be investigated. Wallace said that the prime minister “will be asking some questions” about how the documents came to be left on the ground.

“We’ll find out and get to the bottom of it. The evidence looks pretty clear. Clearly it’s not good enough, simple as that,” he told Sky News. “I think the prime minister will be asking some questions, I think we need to understand, quite rightly, how that happened.”

Labour said foreign secretary Dominic Raab has “serious questions to answer” and that the destruction of sensitive materials should have been a “top priority”. Lisa Nandy, his opposite number, called on the government to “urgently assess” the individuals who may have been identified by the breach and whether operations may have been compromised. The Commons Foreign Affairs Select Committee is now set to launch an inquiry.

The Times was also in contact with the Foreign Office, which appeared unaware of the contact details or location of their missing staff, to decide how long the story could be held back. A 24-hour period was decided on, to allow the Foreign Office to locate staff.

A source added: “We are grateful to The Times for sharing the information retrieved with us and working with us to enable us to get these three families to safety.”

The exposure of Afghan staff was clear from the documents I saw scattered by the ashes of a barbecue in the backyard of a British embassy residency building.

At first, as I accompanied a Taliban patrol through Kabul’s abandoned diplomatic quarter in search of a portrait of the Queen, the dusty sheets of paper seemed unremarkable among the general mess of the British embassy retreat: the guards’ bulletproof jackets and boots, the diplomatic vehicles strewn across the tarmac in Embassy Row, the books on wine and state affairs, a picture of an SAS patrol, boxes of office equipment and the place cards for official dinners, gold embossed with the lion and unicorn of the royal crest.

It was only as I stooped to examine the documents more closely that I realised their significance. While the Taliban patrol was vowing to protect the embassy and any portrait of the Queen they found from looters, Britain’s diplomats had left the personal information of some of its Afghan employees at the embassy — their names, addresses and phone numbers, as well as those of job applicants — thrown to the dust as the city fell to the Taliban.

In the pell-mell rush from the embassy, British staff had risked the lives of Afghan staff, failing to destroy sensitive data records despite established and well-practised protocols. Did the young Afghan man, who applied for a job at the embassy this summer, proudly listing his previous experience working for the US military in Helmand on his CV, deserve to have his name, phone number and full address left by the embassy for the Taliban to read?

“To obtain a position within your esteemed organisation where I can utilise my abilities for the benefit of the organisation” he had written as his objective in applying for a job there. The words could cost him his liberty — or life.

Did the 33-year-old from Kabul, excellent at German, English, Russian and Dari, who had applied for an interpreter’s job on the back of previous experience working with the Germans in Kunduz ever think that his name, address and phone number would be effectively supplied to the Taliban by fleeing British embassy staff?

The 30-year-old cook and housekeeper at the embassy was, the documents showed, also a cousin of the Afghan manager of the embassy’s residency building. I know now that both those men, whose names and contact details were listed in full on the papers in the dust, escaped to the UK over the past few days, as I later called their numbers to check.

Yet it was no thanks to their employers at the embassy. Both those men only managed to reach the airport days after the embassy was abandoned on August 15 as the Taliban entered Kabul. With their home addresses left on the ground for all to see they were lucky to escape arrest, or worse.

Nor were they the only ones whose names were left in the embassy grounds with casual abandon.

“We are very, very afraid,” one of the abandoned embassy employees told me when contacted late on Wednesday. Along with his wife and daughter he had tried the previous day to get through a gate held by the British on the airport perimeter but failed. Taliban had appeared among the crowd with whips, firing overhead. “The scene was terrifying and so horrible. It scared my daughter more than I can describe. But we have no choice but to try to get out again. There is not much time left.”

The Foreign Office appeared to have lost these staff, and their evacuation only occurred after their details were passed on by The Times.

The fate of the Afghan interpreters employed by the British embassy and military lies at the heart of the row over the foreign secretary’s decision to lie on a beach rather than accept a request to speak to Mohammad Haneef Atmar, his opposite number in Afghanistan, two days before the fall of Kabul. That the personal details and home locations of some Afghan staff members and job applicants were left in the dirt around the embassy complex for the Taliban to see adds to a sense of unprofessionalism surrounding the British response to the Afghan crisis.

Ironically, it was the Taliban, as their clean white flag fluttered over the access checkpoint to Embassy Row, who presented themselves in a more professional manner in victory than western governments had in retreat.

Dressed in clean combat uniforms, looking more like a paramilitary security unit than an insurgent force, the team of fighters who escorted me around the abandoned diplomatic quarter alternated conversation between battlefield tales of fighting British and American troops and expressing their wish that foreign diplomats would return.

“We are under strict orders that the honour of the Islamic Emirate rests on our ability to safeguard the diplomatic quarter, including the British embassy,” said Rahimullah Hijrat, 31, the Taliban commander in charge of embassy security.

Reflecting on a life of war, in which he had fought American and French troops, he recalled the deaths in battle of two cousins and a nephew, who was killed fighting the British in Helmand, as an inevitable price of the conflict.

“When you want something as much as we wanted an Islamic emirate then you know you will have to pay a heavy price,” he said, as we walked through the abandoned guard posts into the British embassy grounds.

He stopped briefly to point out an armoured diplomatic vehicle badly parked near the ambassador’s residence, and said that it belonged to Atmar, the Afghan foreign minister.

His fighters, some speaking fluent English and seemingly proud of their role as embassy guardians, were keen to show themselves as professionals, demonstrating how key access doors to the main embassy building were closely guarded. Nevertheless, three of the Taliban, having peered with curiosity at books on wine and state papers from 1923, could not resist picking up a painting by the British artist James Hart Dyke in the accommodation block behind the ambassador’s residence, which showed an SAS desert patrol.

Unaware that Hart Dyke is the favoured artist among British military and intelligence circles, they delighted in the irony of posing with a painting of their defeated enemy. The floor was littered with scattered embassy place cards embossed with the royal crest.

“Declare to us that you have been defeated and we can be friends,” one said in amusement. The premises appeared not to have been looted — the jumbled belongings seemed to have been discarded in the rush of leaving rather than the anarchy of pillage — and when I eyed one of the high-quality sets of abandoned body armour too long I was politely scolded and asked to touch nothing.

“We are preserving security here until the day your diplomats recognise us and return here,” Hijrat added.

“Until then everything will be kept as it is. If we find a portrait of the Queen then we will safeguard her too. She is your affair not ours. When the British come back, as we hope they will, then we expect to be their guards too. Nevertheless, we are surprised to see the panic and speed of the British retreat from this war.