Myanmar Ambassador, Who Opposed Coup, Is Target of Assassination Plot 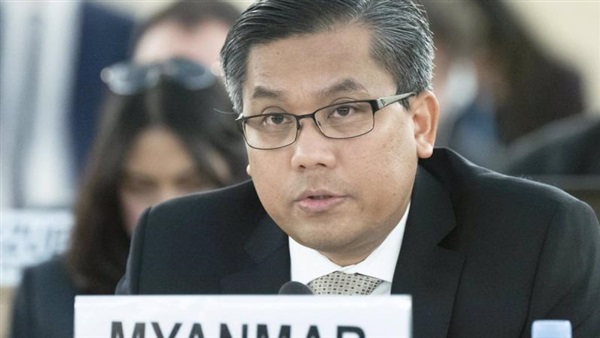 Two Myanmar citizens living in New York plotted over the past month to attack and potentially kill the country’s ambassador to the United Nations who resides in Westchester County, federal prosecutors in Manhattan said on Friday.

After being contacted by an arms dealer in Thailand, one of the men, Phyo Hein Htut, agreed to “hire attackers” to injure the ambassador, U Kyaw Moe Tun, in an effort to force him to step down, according to court documents. If the ambassador, whom Myanmar’s military has repeatedly tried to replace, refused to resign, the dealer proposed the attackers kill him, prosecutors said.

Mr. Phyo Hein Htut, 28, and Ye Hein Zaw, 20, who prosecutors say served as intermediaries and made payments to fund the attack, each face a charge of conspiracy to assault and make a violent attack upon a foreign official. Neither entered pleas on Friday as they made initial court appearances in White Plains, N.Y., on their criminal complaints.

“Time was of the essence when we received information about a threat to Myanmar’s Ambassador to the United Nations,” Jacqueline Maguire, an acting assistant director at the Federal Bureau of Investigation, said in a statement. “Our laws apply to everyone in our country, and these men will now face the consequences of allegedly breaking those laws.”

If convicted, Mr. Phyo Hein Htut and Mr. Ye Hein Zaw could each serve up to five years in prison. Lawyers for the two men did not immediately respond to requests for comment on Friday.

The charges come at a time of upheaval in Myanmar. After the country’s elected government was overthrown in a military coup in February, protests of millions broke out on the streets.

At the time, the ambassador, Mr. Kyaw Moe Tun, stood in open opposition to the ousting of the country’s civilian leader, Aung San Suu Kyi. In February, he delivered a defiant speech at a United Nations General Assembly meeting in New York, calling for “the strongest possible action from the international community” to restore democracy.

The audience applauded, and during the meeting, Mr. Kyaw Moe Tun raised his hand in the three-finger salute of resistance from the “Hunger Games” films, which came to represent the country’s protest movement.

“I wanted to do something with maximum impact,” Mr. Kyaw Moe Tun later told The New York Times. “To show how shocked I am, that in the modern world for a military to have a coup like this is not acceptable.”

His speech and actions drew the ire of the country’s military leaders, who accused Mr. Kyaw Moe Tun of high treason and tried to replace him as their ambassador. But Mr. Kyaw Moe Tun refused to go, the diplomat chosen by military leaders to replace him quit, and the General Assembly, which accredits diplomats, did not recognize the military’s efforts.

But since July, the plot to force him to step down, and to kill him if he did not oblige, had been brewing, according to court documents. Mr. Kyaw Moe Tun told Reuters earlier this week that he had been made aware of a threat against him and had stepped up his personal security. The ambassador’s office did not immediately respond to a request for comment on Friday.

According to the documents, Mr. Phyo Hein Htut told F.B.I. investigators that the arms dealer said he had decided to reach out to him on Facebook and through FaceTime after he had seen a photo of Mr. Phyo Hein Htut. The dealer, who is not identified by name, offered to give Mr. Phyo Hein Htut money to hire people to hurt the ambassador and compel him to leave his post, and to kill him if he did not agree, court documents say.

The two also agreed that Mr. Phyo Hein Htut would hire people to tamper with the tires of the ambassador’s car to cause a crash while driving, according to the documents.

Mr. Phyo Hein Htut later told a volunteer security guard at the country’s U.N. mission about the plan “to hire a hitman” to hurt or kill Mr. Kyaw Moe Tun, according to an interview between investigators and the guard this week outlined in the documents.

Mr. Ye Hein Zaw, who was serving as an intermediary between the two men, sent Mr. Phyo Hein Htut two money transfers of $4,000 over the payment app Zelle in late July, documents say. Prosecutors said Mr. Phyo Hein Htut told investigators that he had agreed to receive the sum up front.

In a call between the two defendants earlier this week, Mr. Phyo Hein Htut told Mr. Ye Hein Zaw that the people who were hired to lead the attack could “finish off” the ambassador if they received additional money beforehand. Mr. Ye Hein Zaw agreed to make another payment of $1,000, documents say.

Upon his arrest on Thursday, Mr. Ye Hein Zaw told investigators that he had made the money transfers, according to his criminal complaint, and said that he regularly interacted with the Thai arms dealer, sending payments on his behalf and recently booking travel to the U.S. for two other people at his request.

“We commend the tireless work of our law enforcement partners at all levels of government to ensure the safety of foreign diplomats and officials,” Audrey Strauss, the United States attorney for the Southern District of New York, said in a statement on Friday.