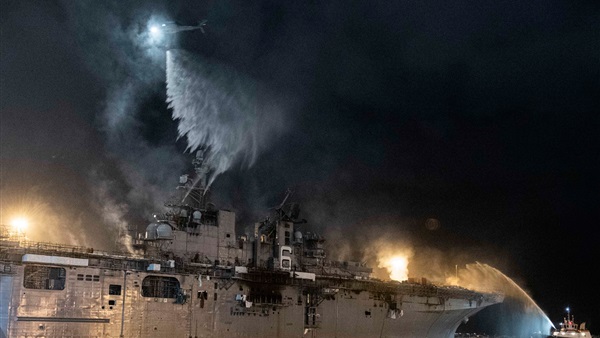 A young sailor with a grudge against the American navy is the prime suspect in a blaze that destroyed the $1 billion warship USS Bonhomme Richard.

A search warrant seen by US media alleges that Ryan Mays, a navy seal drop-out, started the blaze on July 12 last year. He has denied wrongdoing.

The fire in San Diego, California, burnt for nearly five days, injuring 40 sailors and 23 civilians. It was finally put out by 400 sailors from 15 vessels, as well as helicopters and numerous military and civilian fire departments.

The warrant claims that three firefighting stations on the ship were possibly sabotaged. Damage to the warship, which was commissioned in 1998, was so extensive it had to be scrapped after repairs were estimated at $3.2 billion.

Mays, 20, who was arrested after being interviewed for ten hours, faces charges of aggravated arson and wilfully putting a vessel at risk.

He enlisted in 2019, joining a 24-week course but pulled out after five days. He was assigned to the USS Bonhomme Richard as an “undesignated seaman”. The warrant alleges that he “showed disdain towards authority and the US Navy”.

One of the 177 sailors that the Naval Criminal Investigative Service interviewed claimed that Mays “hates” the navy.

Witnesses reported seeing him, or someone resembling him, in the vicinity of the vessel before the fire.

Mays’ lawyer told the Los Angeles Times that the warrant was “just an affidavit” and said evidence could prove it was invalid. The warrant said that Mays denied starting the fire and claimed that he was being “set up