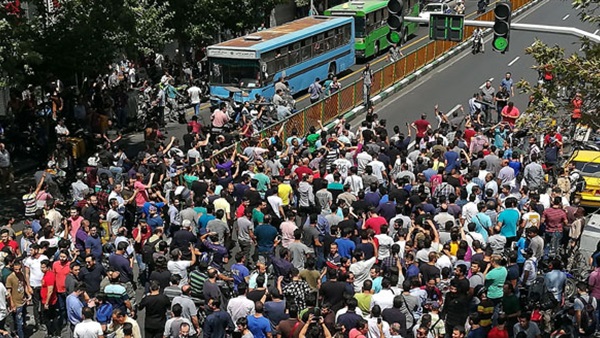 Iranian authorities have intensified their repression of demonstrators protesting water shortages in the southwestern province of Ahwaz.

The demonstrators have, meanwhile, moved from demanding water to demanding the overthrow of the Iranian regime.

They are reaching out to Ahwazis in other Iranian provinces. They are also teaming up with Kurds and other minorities in the country.

All these minorities are coming together to reject the policies of the Iranian regime.

The protests are also seeping into parts of the Iranian capital.

Death to the dictator

The opposition, People's Mojahedin Organization of Iran, also supports the protests, along with many opposition parties outside and inside Iran.

In the same videos, the protesters appear chanting slogans against the Iranian regime.

Ahwas has been suffering from water scarcity for a long time now. The water shortages are bringing unprecedented droughts to the province, even as it theoretically enjoys major water sources. However, these resources had been wasted in the initiation of futile projects.

Activists on social media shared videos showing the fans of the Iranian Persepolis Club, chanting against Supreme Guide Ali Khamenei in the city of Baharestan.

The fans' celebration of the club's recent soccer victories turned into a show of support for Ahwaz.

The fans of the club denounced the Iranian supreme guide and the repression of Iranian authorities.