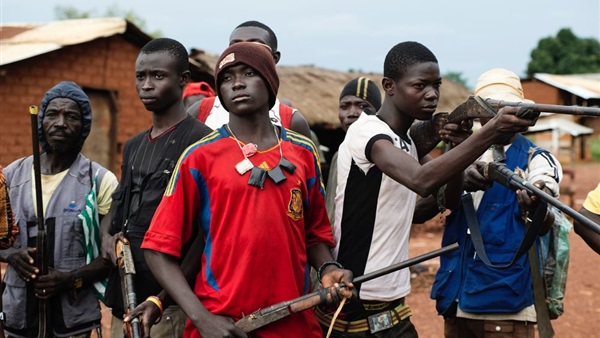 The Central African Republic is suffering from the spread of terrorism and chaos on its soil, affected by the political turmoil within it, as well as sectarian rivalries and international competition over its precious resources from the gateway of combating violent extremism and imposing security in the region.

The international struggle for control of the Central African Republic and the loyalty of its political leaders has escalated recently according to special interests, as the French and Russian governments showed the existence of major differences between them over the political and economic conditions in the region, amid an unbridled desire by ISIS to establish a large branch in the center of the continent.

International conflicts remain one of the main reasons contributing to terrorism by creating the space for violence and the proliferation of weapons due to the instability of political authority, leaving no room for the security forces to control the internal situation and diverting their attention between the criminal and political security.

The Institute for Economics and Peace in Sydney, Australia, said in its statistics on the International Terrorism Index for the year 2020 that international and internal conflicts over power and the influence of the government, with the resultant sectarian and ethnic differences, increase the chances of terrorism growing, adding that the death rates resulting from terrorist attacks are directly related to the rate of political stability and the stability of governance and security.

Based on this, the Central African situation gives ISIS an opportunity to fulfill the directives of its late founder, Abu Bakr al-Baghdadi, who appeared in his last video clip before his death carrying a file with “Central Africa Province” written on it, in a clear indication of the determination of organizing to spread to the entire region, which includes the Central African Republic (CAR), the Democratic Republic of the Congo (DR Congo) and Congo-Brazzaville.

For his part, French Foreign Minister Jean-Yves Le Drian accused the Russian government in June of seeking to control the CAR, in addition to quarrels between the two countries about their respective orientations towards the country, which is rich in natural resources.

France, for its part, supports international resolutions banning weapons inside the country, while Russia demands weapons to control the situation. Paris accuses Moscow of exploiting these demands to deploy its paramilitary forces and private security companies in CAR, profiting from controlling the mines.

Pillars of terrorism in CAR

The aforementioned variables represent an area of terrorist spread, and this appears in the various attacks in the country. The International Terrorism Index indicated that, in 2014, CAR ranked 24th globally on the terrorism index, and in 2019 it ranked 14th.

Influenced by the violence of the extremist Seleka group, which contributed to domestic turmoil that resulted in the removal of President François Bozizé from power, as well as an international conflict over the country's mines, which occupy the 14th place internationally in the world's diamond reserves, in addition to a large stock of precious gold metal.

Regarding these conflicts and their impact on the spread of terrorism, in particular to fulfill the desires of ISIS in the region, Ali Bakr, a researcher of extremist movements at the Al-Ahram Center for Political and Strategic Studies, said that the weakness of the security forces in CAR and the neighboring countries gives the opportunity for armed movements wishing to steal the region’s wealth to control the situation and recruit more citizens by exploiting their poverty and their need for money amid the absence of the state’s role in realizing the aspirations of the people.

Bakr noted in a statement to the Reference that international conflicts and global desires to benefit from the resources of these weak states fuel chaos and violence because of the opportunities it provides to countries, such as Iran, that run proxy wars seeking to control the region’s treasures.