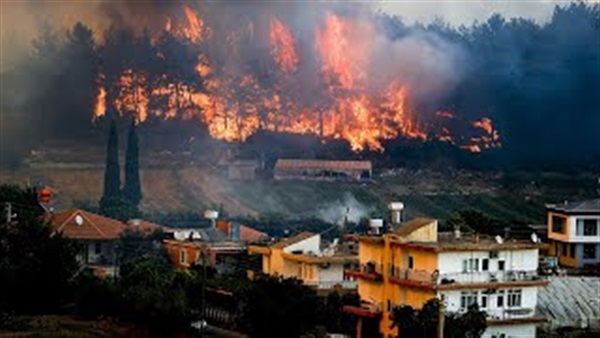 Three people have died and 50 more were hospitalised by a massive wildfire in southern Turkey, where firefighters battled the massive blaze for a second day on Thursday.

More than 100 other people had to be evacuated, required medical treatment or suffered damage to property as a result of the fire.

In countries across the Eastern Mediterranean and beyond, firefighters battled out of control fires this week amid high temperatures, strong winds and severe droughts.

In Lebanon a teenager died fighting a fire on Wednesday, while a day earlier Greek authorities evacuated areas outside the capital as fires encroached on Athens. Hundreds have been evacuated ahead of wildfires ravaging Sardinia, while Russian firefighters in Siberia have called for more help fight hundreds of fires smouldering across the vaast Yakutia region.

A heat wave is scorching southeast Europe, with temperatures rising above 40C in parts of Greece and across much of the region.

Weather experts in Athens said they expected the heat wave to extend into next week, making it one of the most severe recorded in the country since the mid-1980s.

Bekir Pakdemirli, the Turkish agriculture minister, said that around 400 firefighters, a plane and 19 helicopters had been sent to the town of Manavgat and the surrounding area to tackle the fires.

Mr Pakdemirli said an 82-year-old man was found dead during the evacuation of the district of Kepezbeleni, ten miles north-east of Manavgat, and that ten people were stranded at the nearby Oymapinar dam.

Rescue units were on their way to the stranded people, he said, while several people have been injured.

Authorities in Turkey have evacuated 18 villages and districts in Antalya, while 16 more villages were evacuated in the neighbouring provinces of Adana and Mersin.

“It’s an unbelievably bad sight. We literally didn’t even realise what we were in,” Şükrü Sözen, the mayor of Manavgat, said in an interview with CNN Turkey, adding that offices and residential buildings had burned down.

Videos shared online showed fires burning near the resort city of Marmaris, which is popular with British holidaymakers.

It comes just a week after Turkey's northeastern province was struck by severe flooding which led to scenes of cars floating down streets and dozens of evacuations.

Speaking on Wednesday when the fires first broke out, Turkish president Recep Tayyip Erodgan said "all necessary support will be given to our citizens who have suffered from the fire".

He added that an investigation had been launched into the cause of the fire.

In Lebanon, firefighters struggled for a second day on Tuesday to contain wildfires that spread across the border into Syria.

The teenager was with other residents from the remote Akkar region who had rushed to the scene where firefighters were battling to protect homes.

Lebanon's caretaker Prime Minister Hassan Diab called for urgent assistance from neighbouring Cyprus. A three-day brush fire there earlier this month was described as the most destructive blaze in the country's 61-year history as an independent republic.

In the past two years, summer heat waves have contributed to hundreds of fires across Lebanon and the coastal highland regions of neighbouring Syria that have threatened residential areas and forces the evacuation of hundreds of homes.

Public anger over the slow response of Lebanese authorities to historic wildfires in 2019 contributed to widespread protests that brought down the government.

On Tuesday more than 50 wild fires broke out in Greece amid high temperatures, a severe drought and strong winds. Greek authorities evacuated several areas northeast of Athens as an out of control blaze advanced on towns about 20 miles from the capital