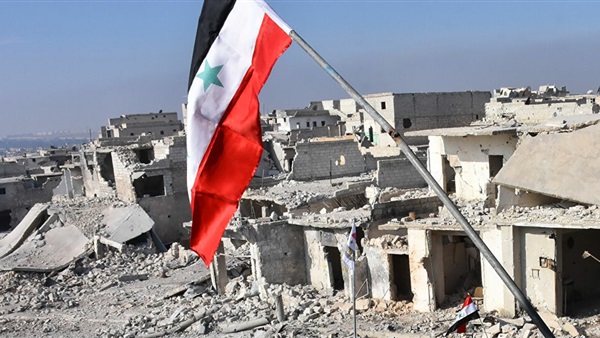 In a new Iranian attempt to tighten control over Syrian resources and win the reconstruction cake, the mullah regime announced a comprehensive cooperation agreement with Damascus focusing on the economic aspect, as Iranian Parliament Speaker Mohammad Baqer Qalibaf announced that the terms of this agreement are being drafted in preparation for reaching the final form.

After his arrival at Damascus airport on Tuesday evening, July 27, Qalibaf confirmed that a comprehensive agreement for cooperation between the two countries is currently being drafted, looking forward to ratification by the parliaments of the two countries and working to implement it on the ground by allowing merchants and businessmen from both countries the opportunity to raise the level of economic and commercial cooperation and aid the reconstruction of Syria, according to the Iranian government news agency IRNA.

During a joint press conference held with Syrian Parliament Speaker Hammouda Sabbagh, Qalibaf congratulated Damascus on holding the presidential election, which he described as “successful,” and said, “After the failure of the terrorist scheme, the time has come for reconstruction and activating the economic movement in Syria.”

Qalibaf’s visit is scheduled to last four days, during which he will meet with the country's senior officials, including President Bashar al-Assad.

In June, an economic forum was held between the two parties in Damascus, organized by the Syrian-Iranian Joint Chamber of Commerce, which focused on ways to develop bilateral relations and to overcome any difficulties facing trade and economic relations.

Syrian Minister of Economy and Foreign Trade Mohammad Samer al-Khalil said that the discussions focused on raising the levels of trade exchange and ways to exchange products between the two countries, as well as the mechanisms for this, calling on the Chambers of Industry, Agriculture and Commerce in his country and the Joint Chamber of Commerce to expedite submitting a list of products that can be exported and imported. He noted that there will be a specific mechanism for financial transfers in order to shorten the time, claiming to facilitate the movement of trade and investment exchange between the two countries.

Meanwhile, Iranian Minister of Roads and Urban Development Mohammad Eslami pointed to the preparation of programs to develop trade and investment exchange with Damascus, as well as the agreement to establish a central committee aimed at the reconstruction in Syria.

Iranian media reports quoted Iranian Deputy Minister of Roads and Urban Development Mahmoud Mahmoudzadeh as saying that his country could build hundreds of thousands of homes in Syria without any competition if it only had the money, counting that the lifting of US sanctions on Tehran might free its hand for Syria’s reconstruction.

The head of the Reconstruction Association in Tehran, who accompanied the Iranian delegation to Syria to sign agreements that included reconstruction in 2018, said that his country had lost opportunities for reconstruction in Syria, stressing that no agreement signed between the two countries has been implemented for years. He noted that “none of the terms contained in the important agreements that were reached between the two countries have been translated economically,” referring to memos related to the housing, transportation and banking sectors. But Iranian Ambassador to Syria Mehdi Subhani reiterated last month that Iran and Russia had stood by Syria during the war, so they will get the largest share in the reconstruction.