Tunisia's Brothers selling nothing but illusion to people 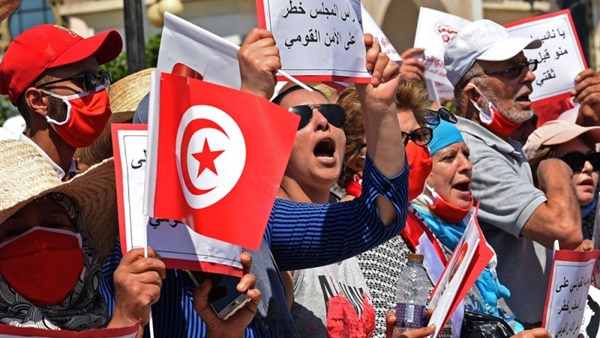 Tunisian President, Kais Saied, succeeded in ending the hegemony the Ennahda Movement, the branch of the Muslim Brotherhood in Tunisia, imposed on the Tunisian political stage, for the first time in 11 years.

The Tunisian leader did this in less than half a year.

Tunisia's economic conditions were deteriorating and its government and parliament failed in managing the outbreak of the Covid-19 pandemic.

These failures made it necessary for the Tunisian president to take exceptional decisions.

The Ennahda Movement lived its golden age when its leader Rached Ghannouchi returned to Tunisia from France after the downfall of the Ben Ali regime in 2011.

Since then, Ennahda has become the most important force on the Tunisian political scene.

It strived to masquerade as an enlightened faction that pushes for the interests of the Tunisian state.

However, it later proved the opposite. Ennhada failed in achieving any successes for Tunisia. The conditions of the Arab country only deteriorated in the past 11 years, during which Ennahda ruled.

There was nothing in Tunisia in these 11 years, but political tensions as Ennahda was busy strengthening itself at the expense of the living conditions of millions of Tunisians.

This filled ordinary Tunisians with anger at the movement, its party and politicians.

President Saied was instrumental in unseating the Brotherhood and ending its monopoly on the Tunisian political stag.

Saied's relations with Ennahda passed through numerous turns. At first, the Islamist movement introduced Saied as a president who strictly adheres to the rules of the Islamic religion.

This made Ennahda believe that Saied would be the Tunisian president giving it the freedom to do whatever it wanted.

Saied, for his part, remained silent. He worked with all political parties in his country, including Ennahda Party.

Nevertheless, a change happened when some developments happened in neighboring Libya in 2019 until mid-2020.

These events, especially the advance of the Libyan National Army toward Libyan capital Tripoli, made cracks in relations between the two sides. These cracks then evolved into confrontation.