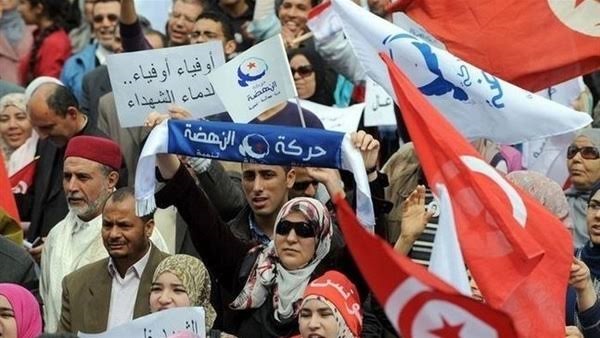 "Either we or no one else," is a slogan raised by the terrorist Muslim Brotherhood movement in the face of its opponents everywhere.

The terrorist movement raised this slogan wherever it came to power as well.

It always launches into threats and violence to achieve its dubious goals.

The Ennahda Movement, the political arm of the Brotherhood in Tunisia, followed the same policy.

It jumped to power after the downfall of the Ben Ali regime in the North African country in 2011.

In doing this, Ennahda took advantage of the political vacuum in the country. Nevertheless, as went by, the Brotherhood proved the falsity of its slogans.

Before his assassination in February 2013, Tunisian leftist politician Chokri Belaid expected the Ennahda Movement to follow a violent course if it faced opposition from Tunisians.

Tunisian President Kais Saied's latest decisions to dissolve the parliament and sack the prime minister and the cabinet were met with threats from members of Ennahda Party.

They took to the streets in their attempt to plunge Tunisia into a cycle of violence and terrorism.

The head of Ennahda Movement and the Speaker of the Tunisian Parliament, Rached Ghannouchi, called on his movement's supporters on June 26 to take to the streets to end what he described as the 'coup'.

He asked the Tunisian leader to reverse his decisions.

Ghannouchi posted a video in which he asked Tunisians to stage protests to bring their country back to what he described as the 'democratic path'.

Ghannouchi added that his movement still considers Tunisian institutions to be still standing.

"Ennahda's supporters will defend the revolution," he said.

He went on to say that there is nothing in the Tunisian constitution that allows the president to dissolve the parliament or the government, even during emergency.

"The parliament remains in session and the government is as well," Ghannouchi said.