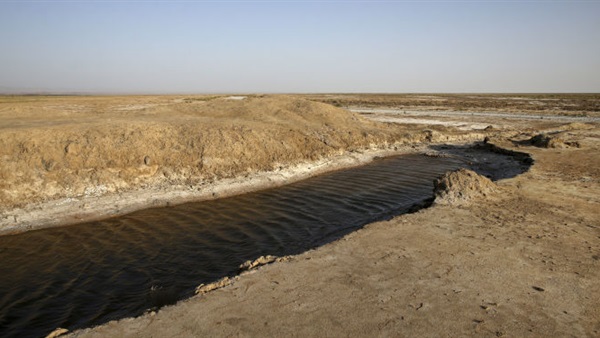 Iran is “water bankrupt” after years of mismanagement under the regime, leading to shortages that have triggered deadly protests across the country and discontent in the wider Middle East, an exiled expert has said.

All sources of the nation’s water — rivers, reservoirs and groundwater — are starting to run dry, Kaveh Madani, a scientist and former deputy environment minister now living in the United States, told The Times.

Iran’s energy minister has admitted that the country is facing an unprecedented crisis, and Ayatollah Ali Khamenei, the supreme leader, has expressed some sympathy with the demonstrators. “We cannot really blame the people,” he said.

At least eight people have died in recent protests, which started in Khuzestan, the southern province which has suffered some of the worst effects, according to Amnesty International.

The water shortage in Iran is being replicated across the region, with the marshes of southern Iraq starting to dry out again despite restoration efforts, and eastern Syria suffering a significant drought.

Farther west, nearly three quarters of Lebanan’s population, including a million Syrian and other refugees, could lose access to safe water in the next four to six weeks, as the pumping system starts to break down amid a fuel shortage, Unicef has said.

The crisis in the Middle East has been brewing for years, with repeated warnings of “water wars”. The problem has been exacerbated by global warming, with average temperatures rising inexorably.

Five countries recorded temperatures above 50C on the same day last month — the UAE, Iran, Oman, Kuwait and Pakistan — with the region’s mega-cities expected to experience temperatures of up to 55C for days at a time by the middle of the century.

However, water experts say that the underlying problem is mismanagement across the region. In Iran, 600 dams have been built since the Islamic Revolution in 1979, with the accompanying hydroelectric power plants now a vital part of the nation’s economy. Yet the experts say that reservoirs in such hot and arid areas lose so much water to evaporation — two billion cubic metres of water a month in Iran — that they have become part of the problem.

“The system is water bankrupt when consumption is more than renewable water availability,” Madani said. He was an academic at Imperial College London before being recruited in 2017 to become deputy head of Iran’s environment ministry. However, his appointment offended hardliners and he was detained by the Revolutionary Guard, accused of spying, and eventually forced to leave.

He said Iran had to plan to live with shortages. “Iran cannot fully restore its wetlands, aquifers, and rivers in a short period of time. So, it has to admit to water bankruptcy and stop denying that many of the damages have become irreversible.”

The crisis was foreseen years ago. In 2005, Reza Ardakanian, now the energy minister, wrote a paper in his capacity as a water management expert in which he warned that Iran’s water extraction was double sustainable levels.

Now he is pointing out that the growing crisis has coincided with one of the driest years in five decades: meteorologists say rainfall is down by as much as 85 per cent.

In Iran, cheap fuel has been used to power pumps to extract vast amounts of groundwater to drive the country’s massively expanded agriculture. The falling levels of groundwater can be detected from space; Nasa says the loss in weight has affected the region’s gravitational field.

Iran is not the only victim. Over-extraction of groundwater has caused droughts in eastern Syria, the country’s breadbasket, while both Syria and Iraq have complained about Turkish dams impeding flows of the Euphrates and Tigris into Mesopotamia.

The crisis has had diplomatic effects. Egypt has threatened a war if Ethiopia continues to fill its Great Ethiopian Renaissance Dam on the Nile unchecked. Israel, by contrast, has offered to double the amount of desalinated water it sells to Jordan as part of efforts by the new government to build ties.

In Lebanon, mismanagement of fuel supplies has contributed to the water crisis. The central bank has subsidised imports but has now run out of dollars, leading to widespread shortages.

Mains electricity is running at a maximum of two hours a day. Operators of the private generators which make up the difference may have to turn them off in the next few days for lack of diesel — raising the extraordinary prospect of a modern country almost entirely without electricity.

Yukie Mokuo, Lebanon’s Unicef representative said yesterday: “Unless urgent action is taken, hospitals, schools and essential public facilities will be unable to function and over four million people will be forced to resort to unsafe and costly sources of water, putting children’s health and hygiene at risk.”