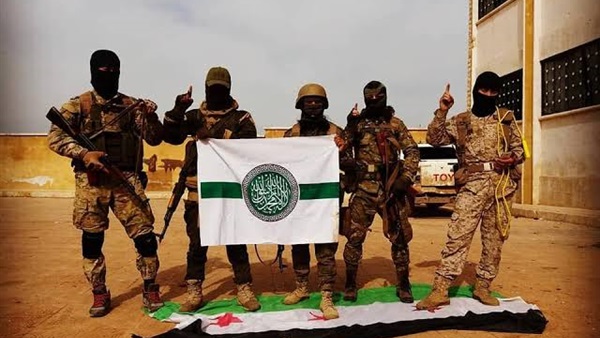 Hayat Tahrir al-Sham (HTS) moved during June to expand its influence in Idlib governorate, northern Syria, by extending its control over other factions to eliminate them, so that there would be no other faction in the governorate. However, most of the groups that HTS sought to get rid of had previously been on good terms with it, according to the Syrian Arab News Agency (SANA) and the Syrian Observatory for Human Rights.

The latest faction that was subjected to HTS’s attempts to get rid of it was Junud al-Sham. HTS leader Abu Mohammed al-Julani asked them either to announce the dissolution of their group and join HTS or to leave Idlib.

Last week, the leader of Junud al-Sham, Muslim al-Shishani, revealed the details of his meeting with one of the security leaders of HTS, and that he and his group had received an invitation to leave Idlib and immigrate to Afghanistan in case they did not join the terrorist organization.

“We received a summons from the official of the General Security Service of HTS, and the next day I went with some brothers to meet him. He asked me to dismantle the group and leave Idlib, and he told me this is a final decision and you are not allowed to appeal this decision, the authority in Idlib is in the hands of HTS. We will not allow anyone who does not obey us or is not under our authority,” he said in a statement.

Shishani pointed out that his group did not participate in any confrontation against HTS, and it has isolated the internal fighting between the organizations and factions since its establishment about eight years ago, so how can they be asked to leave.

After the dissolution of Junud al-Sham, the only factions that remain in Idlib outside the authority of HTS are Ansar al-Islam and Jundallah.

According to Syrian activist Muzamjar al-Sham, HTS recently tried to survey Jundallah’s locations in preparation for a military campaign against it.

He added that the rest of the groups in the area, such as Ansar al-Tawhid, Turkistan Islamic Party, Ajnad al-Kavkaz, and Uzbek groups, are loyal to HTS and work under its supervision.

As for the Guardians of Religion Organization, it is decidedly dissolved, even if no official statement was issued to this effect, under the direction of the mother organization al-Qaeda.

What is behind the demand?

To justify HTS’s actions in Idlib, HTS media relations official Taqi al-Din Omar said that the group is only arresting and besieging some of wanted persons and those with criminal records, adding that this is a general judicial procedure that includes everyone and is not restricted to a certain group. He calimed that some criminal elements have concealed themselves within these small groups, and it is the duty of the judicial authorities to follow them wherever they are.

“With our affirmation once again that Idlib and its fronts are open to all, our dispute is not with those who devote themselves to the fronts or who served the revolution in its various fields, but with a group that committed security and criminal issues that are being duly decided upon,” Omar added.

For his part, Syrian political activist Rayan Maarouf said that Julani is about to eliminate all the remaining factions in Idlib, and all those who remain will deal with HTS on the principle of compromise so that HTS does not approach them. But he added that it is only a matter of time, perhaps within weeks, that all these factions will be under Julani’s authority.

In an exclusive statement to the Reference, Maarouf confirmed that Julani, because of the policies he follows, has many enemies, so HTS is vulnerable at any moment to division.