South African Military Is Called In to Quell Violence 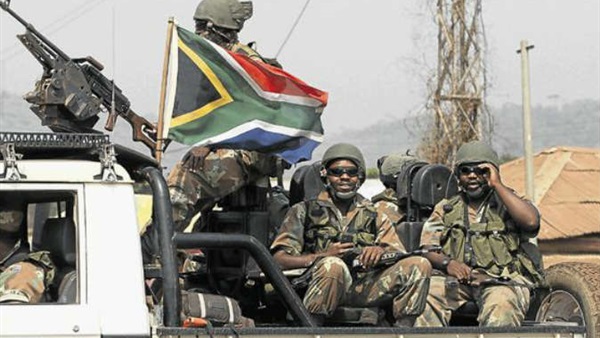 Declaring that the nation is reeling from public violence “rarely seen before in the history of our democracy,” South Africa’s president on Monday deployed the military in an effort to quell the escalating civil unrest that has led to several deaths, tens of millions of dollars in damages to businesses and the disruption of the nation’s coronavirus vaccination program.

Protests that began last week in the eastern province of KwaZulu-Natal over the imprisonment of Jacob Zuma, the former South African president, devolved into looting, arson and gunfire. The chaos spread to Johannesburg, the nation’s financial hub.

The unfolding turmoil presents a deepening crisis for the current president, Cyril Ramaphosa, and his governing African National Congress as they confront deep divisions within the party’s ranks as well as social upheaval in a nation staggering from high unemployment and a devastating wave of coronavirus infections.

Mr. Ramaphosa has faced criticism for his silence in the early days of the unrest. On Monday, he sought to take a firm stance against the violence, saying that looters and rioters would face the full weight of the law.

“What we are witnessing now are opportunistic acts of criminality, with groups of people instigating chaos merely as a cover for looting and theft,” he said in a nationally televised address on Monday night.

Much of the destruction now seems to have little to do with anger over Mr. Zuma’s imprisonment, government officials said, and appears instead to be opportunistic lawlessness. Some analysts and activists said it was an uprising born of the deeper issues of poverty and lack of opportunity plaguing South Africa.

Images on local news stations showed malls burning, hundreds of people leaving stores with items like clothes and appliances, and the police chasing down and arresting whomever they could catch.

“For our people, this is not lawlessness,” said Mxolisi Ngobese, a Zuma supporter from Pietermaritzburg, a city in KwaZulu-Natal that has seen spasms of violence in recent days. “It is survival, and survival at all cost. Vandalism and looting are collateral damage. Shops and businesses have been caught in the crossfire of people’s anger.”

Parts of major highways were shut down after vandals burned trucks in the middle of them. As of Monday morning, the police said, 219 arrests had been made nationwide and there were six deaths. The details surrounding those fatalities were still being investigated.

Several Covid-19 vaccination sites had to close because of the violence, Mr. Ramaphosa said, hampering an already rocky effort as the country battles a swell of infections that has stretched hospitals to the limit. The unrest has also disrupted supply chains, threatening many South Africans’ access to food and medications, he said.

Mr. Ramaphosa warned that the country faced the danger of sliding back to the ethnic infighting of the early 1990s when, under apartheid, “sinister elements stoked the flames of violence in our communities to try and turn us against each other.”

The president’s critics pushed back, arguing that ethnic conflicts were not driving the violence and that Mr. Ramaphosa was fanning tensions by saying so.

The unrest will most hurt the poor and marginalized, destroying businesses that provide jobs and disrupting public services and transportation that workers rely on to get to work, Jessie Duarte, the deputy secretary general of the African National Congress, said at a news conference on Monday. The chaos was orchestrated by people within the A.N.C. hoping to delegitimize  the current leadership, she said.

“We can’t deny that there has been a brewing of this,” she said. “It’s unfortunate, because no amount of anger, frustration can ever move you to doing this amount of damage that has already been done.”

Mr. Zuma, 79, was ordered imprisoned for 15 months by the Constitutional Court, the nation’s highest judicial body, for refusing to appear before a commission investigating sweeping corruption allegations during his time as president from 2009 to 2018. He and his supporters sharply criticized the decision, saying that he was treated unfairly and that sentencing him to prison without a trial was unconstitutional.

Mr. Zuma initially refused to turn himself into prison as the court had ordered, but after lengthy negotiations with the police, he eventually gave in at the last moment and reported to the authorities last Wednesday.

His supporters, who had vowed never to allow his arrest, then called for a shutdown of KwaZulu-Natal, his home province. One of Mr. Zuma’s daughters, Duduzile Zuma-Sambudla, posted images of the destruction on Twitter with messages of praise.

Amid the first flickers of upheaval in the streets, Mr. Zuma’s namesake foundation said on Twitter that it had “noted the reactive righteous anger of the people.” The post went on to suggest that people had been provoked by Mr. Zuma’s incarceration.

Mzwanele Manyi, a spokesman for the foundation, said in an interview that it could not be blamed for the upheaval spreading across South Africa.

“We are in no position to dictate how people should respond to whatever situation they are responding to,” he said.

The Constitutional Court heard arguments on Monday in a petition by Mr. Zuma to have his order of imprisonment rescinded.

The incarceration of Mr. Zuma, a populist who attracts a passionate following, exacerbated tensions between a faction within the African National Congress loyal to him and one loyal to Mr. Ramaphosa, the current party leader. Zuma allies have sought to portray the current unrest as a failure of leadership by Mr. Ramaphosa.

In his remarks on Monday, Mr. Ramaphosa seemed to take direct aim at the Zuma faction. The country had witnessed the devastating impact of corruption, Mr. Ramaphosa said, and was on a path to recovery.

“We cannot allow a few people among us to threaten this collective effort,” he said.