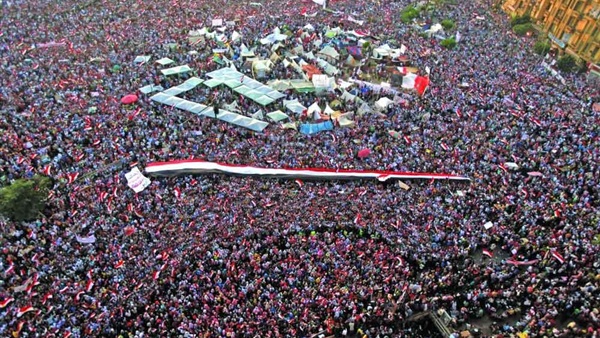 Since its ouster from power in Egypt’s June 30 revolution, the Brotherhood has used many tricks to return again, and the file of bullying abroad is one of the most prominent files used by the group and its members fleeing outside Egypt to incite against the Egyptian state, as the Brotherhood still depends on abroad and plays its favorite game of bullying foreign countries, especially Democrats in the United States due to the latter’s history of supporting the terrorist group.

The international Brotherhood is still searching for a foothold to legitimize its presence within American society and then support it to exploit any political circumstance that would enable its branches to return to the political scene in the Middle East, as the Brotherhood did not find a greater opportunity than the US elections to restore the support of the American administration as it had in the era of former President Barak Obama. The deputy guide of the terrorist group, Ibrahim Mounir, immediately published a statement requesting a review of US policy with the regimes in the Middle East, forgetting that US policies - whether in the arms of Republicans or Democrats - only recognize the language of interests.

The Brotherhood did not hide its complete bias towards President Joe Biden and presented him in the image of a supporter of Islam and Muslims, and that he cites the hadiths of the Prophet Muhammad (peace and blessings upon him), and is a fierce opponent of Islamophobia. American associations affiliated or close to the Brotherhood, such as ISNA and CAIR, promoted Biden’s election among Muslims on a large scale, and they participated in his election campaign at the state and national levels.

According to NPR, before the Democratic primary last year, Islamic organizations invited candidates to attend the annual conference of the Islamic Society of North America (ISNA), one of the largest gatherings of Muslims in the United States. The Brotherhood is not only looking at the benefits it will receive through a “partnership” with Biden, such as obtaining consulting positions, consolidating its influence within the community, and stopping the eyes of censorship over its propaganda and financial activities, but the group also plans to obtain gains for the parent group and its branches outside the United States.

Biden had promised that his administration would appoint Muslim Americans to a number of positions at different levels. Commenting on this, the Global Muslim Brotherhood Daily Watch, which specializes in monitoring the activity of radical Islamist associations, said that the US administration's tolerance of the Brotherhood’s activities in the event Biden wins will open the door the Brotherhood’s polarizing appeals to the community and the formation of youth and student associations, which provides a fertile ground for ideological extremism and taking the war on terrorism back to ground zero.

Over the past seven years, the Brotherhood has played on all sides of the spectrum to achieve its malicious goals. The group has made numerous visits to the US Congress to incite against and distort the Egyptian state after the outbreak of the June 30 revolution and the removal of the group from power. Among the times it visited the US Congress, Fouad Rasheed, a member of the Brotherhood delegation in 2017, was keen to wear a neck tie in the form of the US flag, which sparked a wave of ridicule on social media, as some considered it evidence that the group had reached a high degree of pragmatic decline and political decadence.

Rasheed, a member of the Brotherhood delegation in New Jersey, had previously participated in most of the activities organized by the group in the United States and was presented as its main spokesman.

A delegation from the Brotherhood-affiliated organization Egyptian Americans for Freedom and Justice organized a visit to the US Congress in 2017, and the participants toured the offices of representatives and handed them reports and papers prepared by some of the group's research centers in the context of promoting more lies about Egypt.