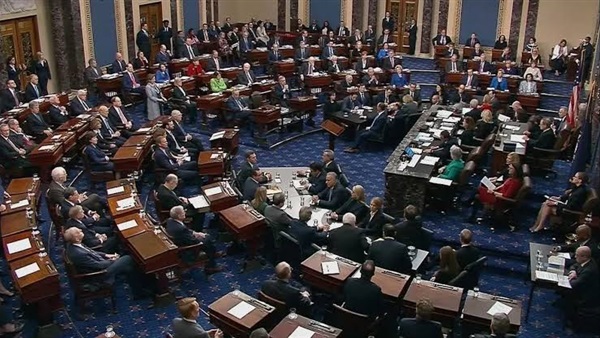 The US Senate adjourned Thursday until next July 12 a vote to repeal the 2002 Authorization for the Use of Military Force (AUMF) against Iraq, after leading Democrats approved a request presented by some Republicans to await a classified briefing for panel members about the policy implications of the measure on the US national security.

Five panel Republicans, mainly Senator Mitt Romney of Utah and Marco Rubio of Florida, asked for a delay in the vote of the Senate Foreign Relations Committee on the resolution.

In a letter they sent to the committee’s chairman Sen. Bob Menendez, the group of five requested a public hearing with the Secretaries of State and Defense, as well as outside experts, and a classified member briefing before the committee decides to consider legislation to repeal the 2002 and 1991 authorizations for use of military force against Iraq.

They wrote, “We respectfully request that a joint resolution to repeal the authorizations for use of military force against Iraq, and for other purposes, which is on the committee’s business meeting agenda for June 22, 2021, be held over until the committee conducts a public hearing and a classified briefing on the issue.”

They said there are weighty questions about the implications of repealing the 2002 AUMF, which “should cause this committee to pause before we act.”

“We should fully evaluate the conditions on the ground, the implications of repealing the 2002 AUMF for our friends, and how adversaries—including ISIS and Iranian backed militia groups—would react,” the Senators continued.

They added that the Senate and the American people should hear from the Biden administration regarding their legal analysis and their strategy “to continue to protect the American people, our personnel, and our allies and partners in the region.”

Last week, the US House of Representatives backed the repeal of the 2002 Authorization for the Use of Military Force. However, to be enacted, the measure must also be approved by the Senate - where its prospects are less certain - and signed into law by President Joe Biden, who has said he supports it.