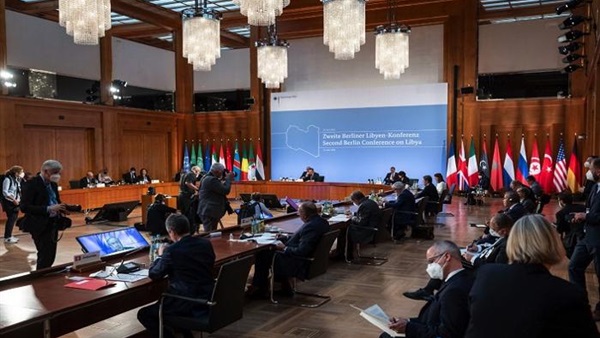 Berlin, in cooperation with the United Nations, has been working in recent days to present a preliminary draft that will be the focus of the final document of the Berlin Summit 2, emphasizing the efforts of the United Nations and Berlin to support and stabilize Libya and work together for the success of the ceasefire initiative and the withdrawal of foreign forces from Libya as soon as possible. It seems that this point is the focus of the biggest disagreement in the meeting, and therefore both Russia and China did not agree on the initial draft, as China reduced its participation via the Chinese ambassador in Berlin, while Russia participated through the Russian Deputy Foreign Minister.

What was agreed upon in closed rooms is the need to build on the first Berlin Summit in January 2020, so that it will be the starting point for resolving the Libyan crisis, pushing the European Union and the African Union to follow up on the political transition process in Libya, and providing a climate for the transitional Libyan government to hold elections on time in December and not to allow any obstacles placed by countries or political groups to prevent the elections from being held on time. This was demonstrated by the welcoming of the head of the transitional Libyan government, Abdul Hamid Dabaiba, to the role played by Berlin since the first summit in achieving stability in Libya so far.

The biggest challenge in second Berlin Summit is how to force countries that have armed groups in Libya, such as Turkey and Russia, to withdraw these forces, despite the pledges made by Russia and Turkey at the first Berlin Summit, as this did not happen on the ground, and these countries claim that there are other countries supporting armed groups and therefore their forces must be present in order to achieve balance, in reference to the United Arab Emirates. But the summit did not succeed in this matter as hoped, in light of the differences between France and Italy on the one hand, and Ankara and Moscow evading their commitments.

To overcome this point, it was agreed to call for the exit of foreign forces in a mutual and coordinated manner in an attempt to achieve political harmonization to get out of the current impasse and to allow the Libyan government to implement its agenda with complete independence, while giving the United Nations the opportunity to sanction those who violate the ceasefire agreement, with the support of the European Union and Berlin for this step.

Germany believes that it is necessary to work with the partner countries that participated in the first summit in order to make the plan a success, especially since Berlin is one of the countries that has supported Libya the most in recent years, providing aid amounting to €270 million. It also organized the first two Berlin summits, and there is no objection to holding a third summit during the coming period in order to promote political solutions to the Libyan crisis, restore stability to the country that has witnessed unrest during the past ten years, and emphasize that this is in the interest of the European Union, especially the Mediterranean countries.

The German government is seeking to strengthen its role during the coming period in the Libyan crisis, so that Chancellor Angela Merkel will leave her position even if by achieving a foreign achievement that will end her political era after 16 years, especially since the German parliamentary elections will be held in September, while the Libyan elections are scheduled for December.

The African Union is participating in the summit and calls on all Libyan parties to hold the parliamentary elections in December, which was expressed by AU Commissioner for Political, Peace and Security Ambassador Bankole Adeoye, who stressed, “We have a goal and we strive for all of us, which is to hold the elections on time and to work to stabilize Libya.”

Meanwhile, Egyptian Foreign Minister Sameh Shoukry stressed the need to work together towards the stability of Libya and to give the transitional government the opportunity to work to strengthen a suitable ground for holding the elections on time, emphasizing that Cairo is working side by side with Berlin and European capitals for Libya’s stability.

Meanwhile, German Foreign Minister Heiko Maas explained his country's efforts to work with the United Nations and participating countries to promote political solutions in Libya, withdraw foreign forces and mercenaries from Libya, and allow the transitional government to organize transparent elections in December.

US Secretary of State Antony Blinken affirmed, “We share the goal of a sovereign, stable, united, and secure Libya free of foreign interference, and this is what the Libyan people deserve, which is critical to regional security as well.”

“For this to happen, the national elections must go ahead in December, and this means that there is a need for an urgent agreement on the constitutional and legal issues that would support those elections, and the full implementation of the ceasefire agreement on October 23, including the withdrawal of all foreign forces from Libya,” he added.

US Special Envoy to Libya Richard Norland said it is important to begin bringing all armed groups in the country under a joint military command, and when the foreign forces leave, it will be necessary to replace them with a unified and viable Libyan national military and police structure.

Libyan transitional Prime Minister Dabaiba stressed the success of the international efforts since the Berlin Summit in January 2020 to reach a permanent cessation of the war, banish the specter of division and fragmentation, unify the executive authority, re-establish the process of work of institutions, especially the parliament, stop economic tampering, and lock down the export of oil that produced collective punishment on all Libyans without exception.

He said added that there are currently efforts to merge the country’s east with the west and open the road linking them, and complete these efforts, adding, “We are heading to visit the government and hold a cabinet meeting from Benghazi and the cities of the south in the next few weeks.”

Dabaiba noted the government's commitment to holding the elections on time and working on the reconstruction of Libya in cooperation with the United Nations, the European Union and friendly countries for a better future for the Libyan people.