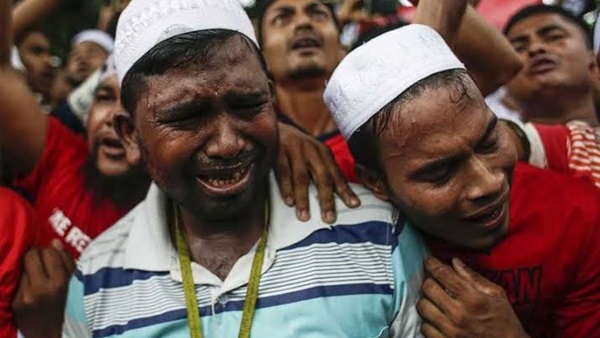 A group of Muslim Rohingya refugees in Bangladesh is learning the art of photography at a local media school to help them document conditions in the sprawling camps where they live and even go on to become professional journalists.

Nearly one million Rohingya are living in often squalid tent cities in the district of Cox's Bazar near the Bangladesh-Myanmar border since fleeing a military crackdown in Myanmar's Rakhine state nearly four years ago.

It is the world's largest refugee settlement.

The Rohingya are a minority group, most of whom are denied citizenship by Buddhist-majority Myanmar.

They have been widely referred to as Bengali by Myanmar authorities, implying they are outsiders from Bangladesh, though some can trace their roots in Myanmar back for centuries.

Omar's Film School was founded in February last year with the goal of training young Rohingya refugees and helping them find careers in photojournalism.

"I want to be a professional photographer, so I am studying to learn," said 22-year-old refugee Jamal Arakani. "With my photographs I want to show the whole world how we live here."

Mohammed Faruque, the school's main instructor, is a part-time fixer and photographer for foreign media organizations at the refugee camps.

He founded the school with his younger brother Omar, an NGO worker and journalist who also worked with major news outlets, including Reuters, before his death in May 2020. The school was named in his honor.

"We want to give training to Rohingya youth in video and photography. We want to document refugee lives. When we go back to Myanmar, we can show to future generations what life was like in refugee camps," Faruque told Reuters.

Bangladesh is keen to see the Rohingya go back to Myanmar, but there has been little sign of progress in talks with Myanmar's military junta.

Faruque is currently teaching 12 students aged between 20 and 25. The classes are weekly and free to attend, and rely mainly on word-of-mouth to recruit students.

Faruque hopes to boost the number of students and acquire more cameras for the school in the future.