Yaqoub renounces Salafism in court: No consolation for his followers 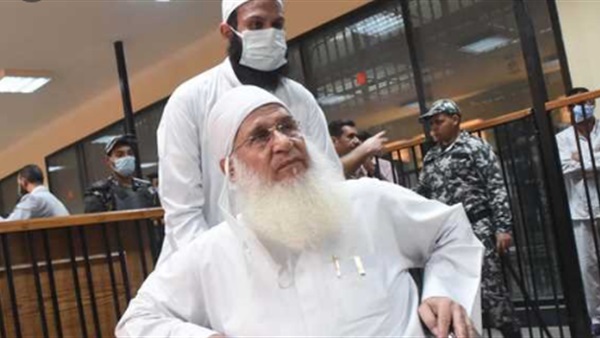 Sheikh Muhammad Hussein Yaqoub, the Salafi preacher, testified before an Egyptian court in the case known as the ISIS Imbaba cell, in which he repudiated his “being a Salafi preacher” and his knowledge of terrorist organizations.

“Honestly, I do not know, for the Salafist is a Salafist, and the takfirist is a takfirist. The word jihad in my opinion is to increase the presence of the righteous so that the nation does not perish, and I belong to the Hanbali school of thought,” according to what Yaqoub said in the testimony that was broadcast from inside the court.

“There are brothers in Egypt...but there is no caliph now because there is no consensus among Muslims for a caliph in the whole world. But the head of state is a commanding guardian,” he added.

Yaqoub considered that the talk that jihad leads to terrorist operations is “misleading” and said, “There is no sane person who says this. Whoever has reached this is ignorant. The internet now makes a person enter and see things stranger than imagination, such as atheism and blasphemy, so this is the reason.”

But Yaqoub’s testimony cannot be viewed apart from his previous statements, especially those made during the era of late ousted Brotherhood President Mohamed Morsi.

“The Salafists have their approach. I am a Muslim and I do righteous deeds, and I call to God, and I say I am among the Muslims. I am not better or more knowledgeable than anyone. If someone says that I am Salafist, I do not say that I am Salafist,” he said.

In his testimony, Yaqoub confirmed that he is neither a Salafist nor a preacher. But in a video clip he published in 2012, he described the Salafist call as an “infallible call” and that it is his method of preaching.

In the video, Yaqoub said, “The difference between our call and the call of others is that our call is infallible. The Salafist call is infallible by revelation, because it did not have a viewpoint that established principles and controls for it.”

In this video, Yaqoub attacked the founder of the Brotherhood, Hassan al-Banna, because of the title of his book “Understanding Islam in the Light of the Twenty Principles”. He said that this title provokes him, which is a mistake because it is supposed to be understanding the principles within the framework of Islam and not the other way around.

About three years later, in 2015, Yaqoub attended an event for what he called the Salafist School and said in his speech that was also recorded, “I am honored to be in the Salafist Call School, in which I grew up and learned from its books and tapes. These are my prayer and my class, and to them my heart longs.”

Throughout his testimony, Yaqoub said that he does not know who ISIS and al-Qaeda are, and he does not know anything about Osama bin Laden, adding, “You can ask me about Ansar al-Sunnah. I am looking for hearts. I heard about al-Qaeda, but this is not my objective.”

Yaqoub's request to testify came based on the defense of two of the accused that they did not belong to ISIS and that all they knew about the da'wah was through following the lessons of Muhammad Hussein Yaqoub and Muhammad Hassan.

The referral order in the case includes 12 defendants, including seven who were released on precautionary measures and five fugitives. The most prominent operations they are accused of are the events of the Ramses security ambush bombing and targeting the security services assigned to the National Bank of Egypt on Al-Batal Ahmed Abdel Aziz Street.

The first accused in the case faces the charge of assuming the leadership of a terrorist group whose purpose is to call for disturbing public order; endangering the safety, interests and security of society; disrupting the provisions of the constitution and laws; preventing state institutions and public authorities from carrying out their work; assaulting the personal freedom of citizens, freedoms and public rights; and harming national unity, social peace and national security by taking over and managing an ISIS cell that calls for takfirism against the ruler and the legitimacy of rebellion against him; changing the regime by force; assaulting judges, members of the armed forces, police and their facilities; sanctifying the blood of Christians; and extorting their money, property and places of worship.