Concerns in Southern Syria over Renewed Displacement to the North 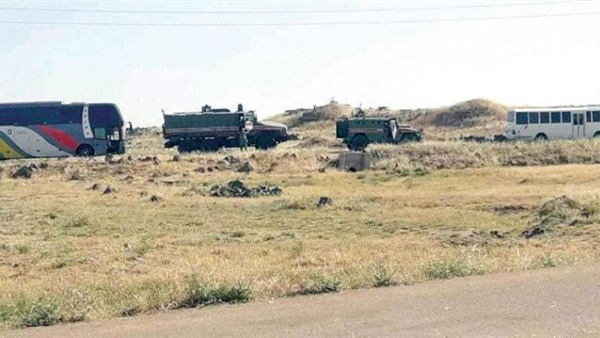 Opposition activists in southern Syria have expressed concern about the renewal of a “displacement scenario” to the north, following the evacuation of dozens of people upon an agreement between the regime and Russian-backed opposition forces.

The Syrian Observatory for Human Rights reported that Turkish soldiers continued to prevent 30 families displaced from the village of Umm Batna in the countryside of al-Quneitra, from entering the city of Al-Bab since Thursday evening.

The Observatory reported that the families from al-Quneitra were stranded at the Abu al-Zendin crossing, which is under the control of Turkish forces and their proxy factions, as they were not allowed to enter the countryside of Aleppo.

Meanwhile, a popular demonstration was organized at the Center roundabout in the city of al-Bab, east of Aleppo, denouncing the Turkish forces’ refusal to allow the entry of the families.

Earlier on Friday, activists reported seeing three buses entering Um Batna in preparation for the evacuation of 30 wanted people with their families to the Syrian North. This comes following an agreement between the military security branch and the Russians on one hand, and the Central Commission in Horan and some of the area’s officials.

A member of the Central Negotiating Committee told Asharq Al-Awsat that the committee in Quneitra and Daraa and local officials “had failed to persuade the Russian side to abolish the displacement condition imposed by the Syrian regime’s officers to resolve the situation in the town of Umm Batna and the rural Quneitra regions.”

He added that several negotiation meetings took place over the past few days in the cities of Daraa Al-Mahatta and Sa’sa, with Syrian regime and Russian officers to ease the tension and military escalation against the town of Um Batna and to go back on the evacuation decision, in exchange for a pledge by the families of the wanted individuals to refrain from committing actions against the regime forces in the region.

The official noted that the talks failed due to the regime’s insistence on the evacuation or extradition of wanted persons.