Return of Iraqis Seen as Easing Threat from Syria Camp 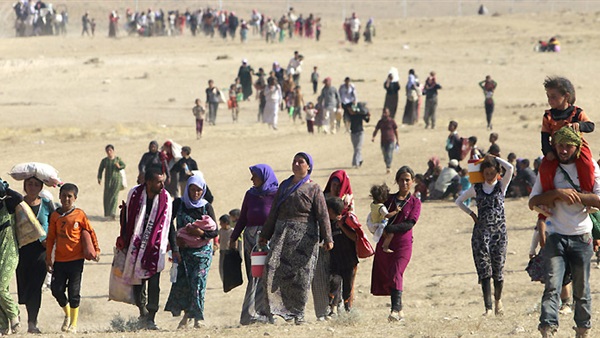 The Iraqi government for the first time is expected to bring home about 100 Iraqi families from a sprawling camp in Syria next week, a move that US officials see as a hopeful sign in a long-frustrated effort to repatriate thousands from the camp, known as a breeding ground for young insurgents.

On an unannounced visit to Syria on Friday, the top US general for the Middle East, Marine Gen. Frank McKenzie, expressed optimism that the transfer from the al-Hol camp will happen. He has repeatedly warned that the youth in the camps are being radicalized and will become the next generation of dangerous militants.

“It would be the first step in many such repatriations, and I think that’s going to be the key to bringing down the population in the al-Hol camp, and indeed in other camps across the region,” McKenzie told reporters traveling with him into Syria, where he met with troops and commanders. “Nations need to bring back their citizens, repatriate them, reintegrate them, deradicalize them when necessary and make them productive elements of society.”

A senior US official said the transfer of people from the camp in northeast Syria is one of a number of issues the US and Iraqi governments are discussing as they work out a roadmap for future diplomatic and military relations. It came up during meetings on Thursday, when McKenzie made an unannounced stop in Baghdad. The official spoke on condition of anonymity to discuss internal deliberations.

Iraqi leaders earlier this year talked about repatriating some of their citizens, but did not follow through. So the plans for next week have been met with a bit of skepticism, and it appeared unclear if it would be a game-changing first step or a one-time deal.

The al-Hol camp is home to as many as 70,000 people — mostly women and children — who have been displaced by the civil war in Syria and the battle against the ISIS group. As many as half are Iraqis. About 10,000 foreigners are housed in a secure annex, and many in the camp remain die-hard ISIS supporters.

Many countries have refused to repatriate their citizens who were among those from around the world who came to join ISIS after the extremists swept across Iraq and Syria in 2014. The group’s physical hold on territory was ended in 2017, but many countries balk at repatriating their citizens, fearing their links to ISIS.

In late March, the main US-backed Kurdish-led force in northeast Syria conducted a five-day sweep inside al-Hol that was assisted by US forces. At least 125 suspects were arrested.

Since then, McKenzie said Friday, security has gotten better at the camp. But, he added, security has no real impact on the radicalization of the youth there.

“That’s what concerns me,” he said, as he stood at a base in northeast Syria, not far from the Turkish border. “The ability of ISIS to reach out, touch these young people and turn them — in a way that unless we can find a way to take it back it’s going to make us pay a steep price down the road.”

As McKenzie crisscrossed eastern Syria, stopping at four US outposts, his message was short and direct — US forces remain in Syria to fight the remnants of ISIS, so the militants can’t regroup. Pockets of ISIS are still active, particularly west of the Euphrates River in vast stretches of ungoverned territory that are controlled by the Syrian government led by President Bashar Assad.

Out there and in the camps, the underlying conditions of poverty and sectarianism that gave rise to ISIS still exist, said British Brig. Gen. Richard Bell, the deputy commanding general for the coalition fight against ISIS in Iraq and Syria, who traveled with McKenzie.

McKenzie said it was important to keep the pressure on the extremist group, “because ISIS still has an aspirational goal to attack the United States homeland. We want to prevent that from happening.”

He spoke to reporters from The Associated Press and ABC News who agreed because of security concerns not to report on the Syria trip until they left the country. As he spoke, a row of M-2 Bradley fighting vehicles were lined up behind him — a reminder of clashes US forces had last year with Russian troops in the north. At the time, McKenzie requested, and got, more troops and armored vehicles to deter what the US said was Russian aggression against patrols by US and Syrian Democratic Forces.

But he said they also represented America’s continued commitment to the mission in Syria, to assist the SDF in the battle against ISIS.

“Look at the Bradleys behind me, look at the base that we’re sitting in right now,” McKenzie said. “I think it’s a pretty strong testament to our commitment.

But when asked how long US troops will stay, he quickly says it is up to President Joe Biden.

Biden has already ordered a full withdrawal from Afghanistan, but so far has said little about the close to 1,000 US troops in Syria and the roughly 2,500 in Iraq. America’s presence in Syria is part of a global posture review now being done by the Pentagon.