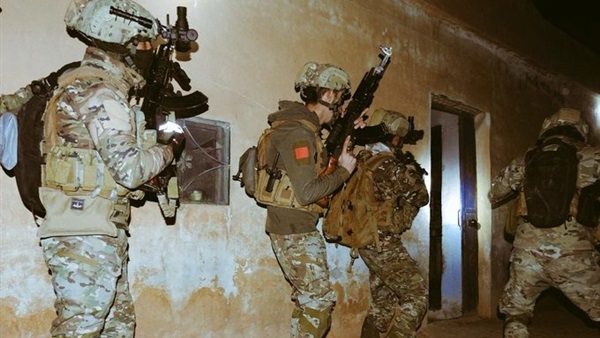 The Syrian Democratic Forces (SDF) launched a massive campaign of arrests against prominent members of ISIS, including in the Baghouz area of Deir Ezzor and the city of Deir Ezzor itself, after information was circulated about these persons seeking to communicate with the terrorist organization’s leadership in Syria and Iraq, according SDF member Ahmed al-Rawam, the Syrian Arab News Agency (SANA) reported.

In the same context, a combing campaign was carried out in the area last month in Deir Ezzor, during which 14 ISIS terrorists were killed.

ISIS had spread again in that region and planted a large number of mines, which has resulted in many deaths and injuries, according to SANA.

The Fifth Corps in the Syrian National Army, which was recently established with Russian support, began deploying heavy and medium weapons in separate areas of the Syrian Badia west of Deir Ezzor in eastern Syria after ISIS targeted Syrian army columns heading to the city of Deir Ezzor.

ISIS poses a threat to the main roads in Syria that connect the Badia with the rest of the governorates, and it also threatens the international trade routes that pass to Iraq and the eastern Syrian governorates.

ISIS also exploited smuggling points on the shore of the Euphrates River in the Al-Busayrah area of Deir Ezzor and the village of Bariha to smuggle people to the city of Deir Ezzor, which necessitated the implementation of anti-smuggling operations by the SDF.

Syrian activist Rayan Maarouf said that ISIS has largely returned to Deir Ezzor governorate again through its cells that forcibly live among the people and threaten those who disclose them.

Rayan confirmed to the Reference that ISIS seeks to enter Deir Ezzor again because of the oil fields and because of the presence of SDF military bases, in addition to the presence of the Kurdish People's Protection Units (YPG), which managed to defeat the terrorist organization last year, as ISIS currently wants to take revenge on the Kurds.