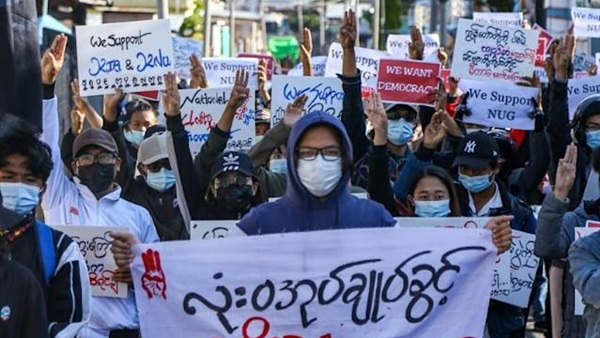 Thousands of anti-coup protesters marched in Myanmar Sunday, calling for a "spring revolution" with the country in its fourth month under a military regime.

Cities, rural areas, remote mountainous regions and even Myanmar's rebel-controlled border territories have been in uproar since the military ousted civilian leader Aung San Suu Kyi in a February 1 coup.

The junta has aimed to suppress dissent through a brutal crackdown that has seen mass arrests and an escalating death toll.

Demonstrations kicked off early in commercial hub Yangon as activists called for a show of force and a "spring revolution".

Youths gathered on a street corner before marching swiftly down the streets in a flash mob -- dispersing soon after to avoid clashing with authorities.

"To get democracy is our course!" they chanted, waving a three-finger salute of resistance.

"To bring down the military dictatorship is our course!"

In northern Shan state, youths carried a banner that read: "We cannot be ruled at all."

By 10 am, violence erupted in the state's Hsipaw township, when security forces cracked down on protesters there, killing at least one.

"He was shot in the head and died immediately," said one protester, who said he rushed to hide his friend's body in case authorities tried to take it away.

"They are asking for his dead body, but we will not give them... We will have his funeral today," he told AFP.

By midday, local media reported that security forces were chasing protesters down and arresting them.

"They are arresting every young person they see," a source in Yangon told AFP, adding that he was hiding at the moment.

Bomb blasts also went off across different parts of the city in the morning.

The explosions have been happening with increasing frequency in the former capital, and authorities have blamed it on "instigators".

So far, security forces have killed 759 civilians, according to the local monitoring group Assistance Association for Political Prisoners.

The junta -- which has labelled AAPP as an unlawful organization -- says 258 protesters have been killed, along with 17 policemen and seven soldiers.