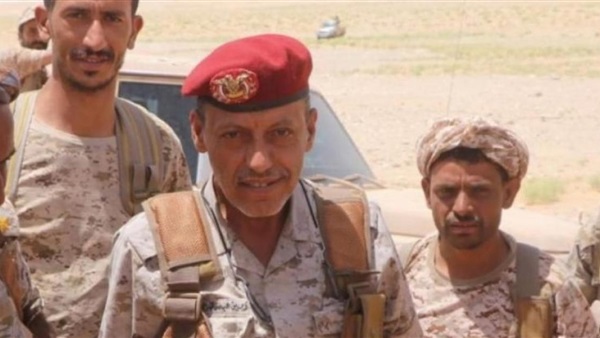 On Saturday, March 27, the Yemeni Ministry of Defense announced the killing of the commander of the Sixth Military Region, Major General Amin al-Waeli, while leading the battles against the Houthi militia on the battlefronts between Al-Jawf and Marib governorates.

The obituary statement issued by the ministry and the presidency of the General Staff confirmed that Waeli was one of the first officers who responded to the call of homeland and duty after the subversive militia invaded the capital, Sanaa, in 2014. He also participated in leading the liberation march from the Hadramout desert.

“He was credited with setting the nucleus of re-establishing the Sixth Military Region, forming its units and commanding it. He also participated valiantly in the liberation operations of a number of regions and sites, leading the ranks and accompanying the heroes, fighting with courage and boldness, and leading with skill and competence,” the statement added.

It indicated that his suffering from cancer did not prevent him from returning to the battlefield, nor did it affect his determination and morale, and he stood tall until he gained the honor of martyrdom.

The statement stressed that the precious sacrifices will increase the determination of the free people to move towards purifying Yemen of Iranian projects and slogans and its subversive militias, as well as combating terrorism and extremism.

The obituary expressed pride in the eternal sacrifices and heroism in all fields and the broad national positions and rallying, appreciating the efforts and support of the coalition to support legitimacy led by the Kingdom of Saudi Arabia in the common national defense battle against the Iranian enemy and confront all plans that lie in the stability and safety of Yemen and the security and safety of the region.

He was previously injured more than once, and he escaped death several times, one of which was in a missile strike on a government building in Al-Hazm, the capital of Al-Jawf, in April 2017.

Waeli was one of the most prominent commanders of the former Republican Guard and the Armored Division and a veteran war commander against the Iranian camp in the region, starting with his participation in the Iraq War as commander of fighting legions there in 1989, before returning to Yemen to participate in leading the wars against the Houthis in Saada governorate, where there has been armed confrontation since 2004. Waeli was the commander of the Saifi camp and then the commander of the 122nd Infantry Brigade in the strongholds of the pro-Iranian Houthi movement in Saada.

Born in Wassab Al-Aali, Dhamar Governorate, in central Yemen in 1962, Waeli holds a bachelor’s degree in Military Sciences, specializing in Artillery Corps from the War College in 1984. He also earned a master’s of Military Sciences from Iraq in 1999.

Sadness descended over the Yemenis after the announcement of Waeli’s death, as they considered this a great loss, recalling his heroics over three decades of confrontations he fought against Iran and its proxies in the region.