Islamists Accused of Inciting Protests over Al-Salt Incident in Jordan 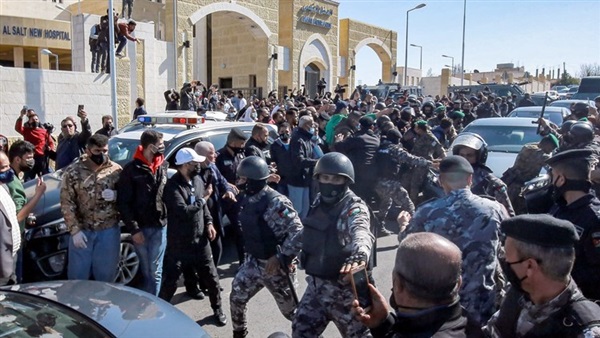 Jordanian security authorities continued to arrest protesters, who defied the curfew, to express their anger over an incident at a public hospital that claimed the lives of nine Covid-19 patients.

The security services forcibly dispersed a number of sit-ins, expanding the wave of arrests to several governorates and regions. Security officials accused the Teachers’ Movement and the Islamic Action Front - the political arm of the unlicensed Muslim Brotherhood – of stirring up the protests.

In a statement issued on Tuesday, the media spokesperson for the Public Security Directorate announced that security forces have “dealt with a number of groups breaching defense orders, putting the health of citizens at risk and contributing to the spread of the epidemic in several locations in the Kingdom.”

While a large number of protesters complied with the official security warnings and left the gatherings, the media spokesman noted that others refused, which “forced the security officers to apply the law with appropriate force to disperse them… for the sake of the citizens’ health safety.”

The spokesman said that a number of public security agents were injured while carrying out their duties and several public and private properties were subjected to material damage and deliberate sabotage.

The angry protests erupted earlier this week in different regions of the Kingdom over an incident at Al-Hussein New Salt Hospital, where nine Covid-19 patients died on Saturday due to an oxygen shortage.

The incident - the first of its kind in the country – sparked outrage and King Abdullah II immediately pledged to hold accountable those who fail to protect the lives of Jordanians.