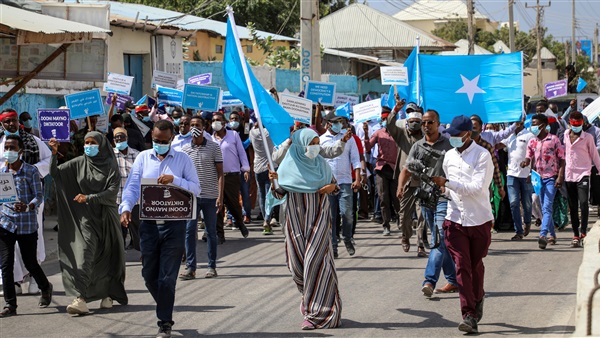 “The person who created the chaos should now avoid using his power,” said Dahir Geele, a member of the coalition of opposition candidates in a statement released Wednesday.

The opposition leaders also accused the government of attacking a hotel in Mogadishu where they were staying last week.

Somali government troops clashed with supporters of opposition leaders on 19 February, as they tried to march near the Mogadishu airport.

The opposition has now called for another anti-government protest rally, to be held at Unknown Soldier’s monument this Friday, in an effort to pressure Farmajo to cede power.

“Given that the government is yet to apologise for its heinous attack on peaceful protesters, we are once again calling for another big rally at the national monument square,” said opposition chair Sheikh Sharif Sheikh Ahmed, a former Somali president.

“And the government should protect this peaceful rally,” he added.

The calls for protest stem from the Somali government’s failure to hold elections by the 8 February deadline, when Farmajo’s presidential term ended.

The opposition has called for him to step down to create space for a transitional authority, as they no longer recognise his administration.

The group proposed the creation of a national council of lawmakers, opposition leaders and civil society to govern the country prior to choosing a new president.

However, the government has remained firm and has refused to bow to pressure.

Government spokesman Mohamed Ibrahim Moalimuu said protests must not be held due to Covid-19 restrictions.

“We won’t allow any rally, be it one organised by the government or the opposition, to take place in Mogadishu because of the surge of coronavirus and security threats,” Somalia Security Minister Hassan Hundubey said.

During the first protests last Friday, the simmering anger among political elite over delayed elections spilled onto the streets and protesters bore the brunt as government troops exchanged fire with armed militia.

“I’ll go to the demonstration to show our stand regarding delayed elections, and I’ll be happy to attend,” he said.

However, there those who are against the rally.

“In light of the last protest rally, all that happened was violence so I will not attend. I don’t support the demonstrations,” said another Mogadishu resident, Hussein Ali.

The north-east Puntland regional government issued a three-page statement on Tuesday regarding the political situation and electoral impasse, which includes eight pre-condition points in order to return to talks.

“President Farmajo must sign a decree limiting executive and legislative powers of the presidency and the parliament,” the statement said.

Another precondition that is bound to draw the ire of Villa Somalia is Puntland President Said Abdullahi Deni’s demand for the sacking of three senior federal security commanders.

The planned Friday protests in Mogadishu will further escalate tensions for a country that already is in a crisis.

The Somali opposition says the anti-government protests will continue until Farmajo accepts to negotiate and levels the political playing field, so the country can have free and fair elections.

Puntland and the southern Jubbaland region will only go back to the negotiating table if their new conditions are met, further complicating and stalling the electoral processes.

Somalis are apprehensively watching as their political elite squabble, putting achievements made in state-building efforts at risk.