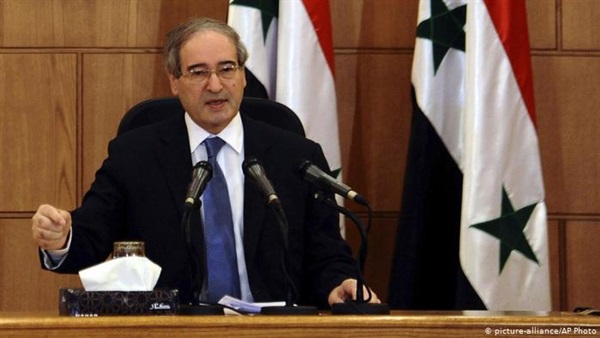 Syrian Foreign Minister Faisal al-Mekdad asserted that the Constitutional Committee, which held its fifth session in Geneva last month, is free in making suitable decisions, saying the UN envoy “must maintain his role as an impartial facilitator.”

On Monday, Mekdad received envoy to Syria Geir Pedersen in Damascus to discuss the political process and economic situation in the war-torn country.

Mekdad asserted to the envoy that the “unilateral coercive measures” – meaning western sanctions - imposed on the Syrian people despite the coronavirus pandemic are further complicating the situation in the country, reported the state-owned Syrian News Agency (SANA).

He said the US and Turkish “occupation” of Syrian territory and Ankara’s support for “terrorists” violate Syrian sovereignty, international law and all relevant Security Council resolutions.

He also pointed out the humanitarian impact of the “criminal and repressive practices” of the Syrian Democratic Forces (SDF) against the Syrian people in Hasakah, Raqqa and Deir Ezzor.

Mekdad called on the UN “to raise its voice in accordance with the charter and international resolutions issued by Security Council against all such practices and to take a clear stance towards them in light of principles and objectives upon which international humanitarian law is based,” reported SANA.

The two sides stressed the importance of guaranteeing non-interference in the affairs of the Constitution Committee, while ensuring the process is carried out by the leadership of Syria, and without timetables imposed from outside actors.

The committee decides on its recommendations and how its work proceeds, said Mekdad, stressing that the Syrian people are the ones who determine their country’s future.

The minister spoke on Monday before the 46th session of the Human Rights Council in Geneva, criticizing the western sanctions, which he said only target ordinary citizens.

He also reiterated Syria’s determination to continue to fight terrorism and exercise its right to eliminate any illegal deployment on its territories.