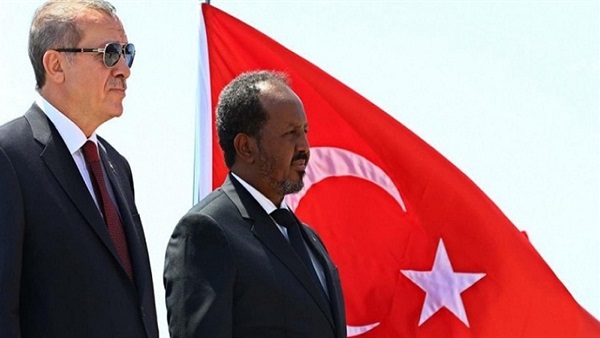 The scene in the Somali capital of Mogadishu brings us back to the year 1991 and the civil war that was sparked there. In recent days, Mogadishu has flared up again, where the sounds of bullets and explosions resound, raising fears of the return of civil war and terrorist attacks, while it has become clear that special forces trained by Turkey are behind this terrifying scenario.

Somalia has been experiencing a political crisis since early February, following the end of President Mohamed Abdullahi Mohamed Farmaajo’s term.

Somalia was initially planning to hold its first direct elections since the civil war that broke out in 1991, but the preparations faltered and the Al-Shabaab terrorist attacks forced the authorities to plan another indirect poll.

In December, the tribal sheikhs were supposed to elect representatives, who in turn would elect a president on February 8.

But the election of representatives was postponed after the opposition accused President Farmaajo, who is seeking a second term, of filling regional and national electoral councils with his allies.

Farmaajo, whose presidential term expired on February 8, 2021, refused to hand over power and hold new presidential elections, which caused the fragile and violent Somali political scene to ignite.

The opposition organized mass demonstrations in the capital, wearing masks and waving the Somali flag, accompanied by soldiers in red military hats and ammunition belts around their bodies, before the outbreak of the shooting, according to videos circulated by Somali media.

Mogadishu witnessed the firing of bullets and rockets when government forces clashed with supporters of the opposition due to the postponement of the elections. Protesters and people in Mogadishu said that the Turkish-trained Gorgor special forces attacked civilians and killed demonstrators, which brought back the atmosphere of the Somali civil war and paves the way for security chaos, which benefits armed groups such as Al-Shabaab.

Turkey, under the leadership of President Recep Tayyip Erdogan, is continuing its destabilizing policies despite the heavy losses incurred by the Turkish forces stationed in Somalia, as the Gorgor Division, trained and led by Ankara, has brought back the atmosphere of war and fighting in the Horn of Africa.

The Gorgor Division received extensive training at the Turkish base in Mogadishu. Its members range between 4,500 and 5,000 soldiers, and they receive weapons and ammunition from Turkey.

The Somali opposition says that Gorgor forces receive orders directly from Turkish officers at the Turksom military base, in addition to orders from Farmaajo.

The Somali opposition has warned Turkey of the dangers of sending arms shipments to the special units, while an eyewitness indicated that Turkish armored vehicles spread in the streets of the Somali capital.

In previous statements, opposition candidates said in a letter to the Turkish ambassador to Somalia that they “learned that Ankara intends to deliver a thousand G3 rifles and 150,000 bullets to the Haramcad unit of the Somali police.”

Abdirahman Abdishakur Warsame, leader of the Wadajir (Unity) Party and one of the candidates who wrote the letter, confirmed its authenticity to Reuters.

The letter said that the candidates are “concerned about the dumping of this quantity of weapons in the country at a sensitive election time.”

The letter indicates that the president “has already used Haramcad's forces in suppression and rigging the regional elections, and therefore there is no doubt that the Haramcad forces will also be used and the weapons coming from Turkey will be used to hijack the upcoming elections.”

The entry into political rivalries at the turn of the open conflict raises the concern of Somalia's allies, as it is in the interest of Al-Shabaab, which is linked to al-Qaeda and which launches attacks on civilians in East Africa.

Hours before the demonstrations, former Somali President Sharif Sheikh Ahmed accused government forces of attacking a hotel where he was staying with another former president.

On Saturday, February 20, 2021, Egypt called on all parties in Somalia to exercise restraint, adhere to peaceful means and dialogue, and work to hold free, fair and transparent elections as soon as the Somalis themselves agree to it.

Egypt said in a statement issued by the Ministry of Foreign Affairs on Saturday that it is following “closely and with great interest the political developments that the Somali Republic is witnessing recently, and the direction that these developments have taken from the outbreak of violence in the capital Mogadishu during the past two days.”

Cairo renewed its call on all parties in the political arena in Somalia to work together to address the causes of the current crisis and reach a consensual solution.

Egypt also affirmed its support for all “political efforts aimed at resolving the current political situation in a way that achieves the hopes of the Somali people for security, stability, development and eliminating the threat of terrorism,” calling on all partners to provide support and assistance to Somalia in order to overcome the current situation and achieve peace and stability in the country.

At least two people were killed and others wounded in an exchange of fire between gunmen and police forces in Mogadishu on Thursday and Friday, just hours before the scheduled opposition rally.

The presidential elections scheduled for Somalia earlier this month were postponed after political talks failed.