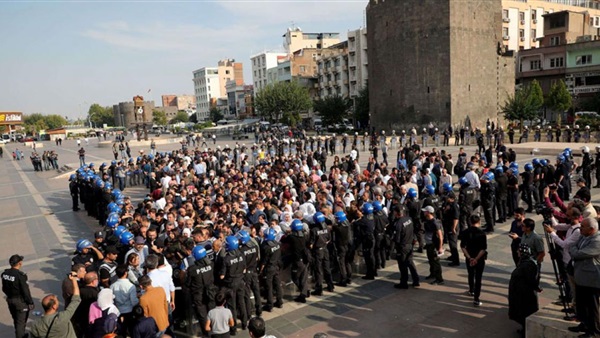 Turkey’s lawyers are among the leading targets of an ongoing government crackdown implemented in the aftermath of 2016’s failed coup attempt in the country.

Representing people accused of terrorism offences has placed the lawyers on Ankara’s chopping block, but they have remained undeterred in vocally critiquing the government amid its increasingly tight chokehold over them and the judiciary as a whole.

The ever-escalating hurdles placed before the country’s lawyers, including detentions, the passing of a law changing the structure of bar associations, and the overall disintegration of the rule of law in Turkey have led Turkish lawyers to look abroad to take action.

The Unconditional Justice Movement was founded by Turkish lawyers in Europe in November, and the small group of dedicated members have remained committed to bringing Turkey’s judicial plight and rights violations to the attention of Europe’s top human rights court every week.

Young lawyers take turns standing before the European Court of Human Rights (ECHR) in Strasbourg to bring attention to the immense pressure facing Turkish defence lawyers and the violations of a right to fair trial, among a string of other judicial issues. Their biggest concern is to convey in full the injustice taking place in Turkey to the court and the European Council.

Member of the organisation, Enes Kabadayı, has himself done time behind bars in Turkey and he explains that the formation of the group was triggered by a statement by President Recep Tayyip Erdoğan in a speech he delivered to mark the beginning of the judicial year of 2020.

Right after Erdoğan said that the government would do whatever was necessary to “block the bloody road from lawyership to terrorism,” 115 lawyers from different groups were detained.

In fact, Turkish courts have handed down 2,728 years in prison to a total of 441 attorneys over the past decade under Erdoğan’s rule, the group says.

Since the failed putsch of 2016, thousands of judges and prosecutors have been sacked, by the government’s own count, and continue to be targeted in the country, which ranked 107 out of 128 countries in the rule of law, according to the World Justice Project index for 2020.

The Unconditional Justice Movement focuses on a different ailment each week, member Betül Alpay explains, from Turkey’s disregard of an ECHR ruling on the recognition of Alevi houses of worship (cemevis) to Ankara’s dismissal of the court’s ruling for the release of jailed Kurdish politician Selahattin Demirtaş.

Regardless of Ankara’s current outlook on the ECHR, the court’s decisions are binding for Turkey as a signatory of the European Convention on Human Rights, Kabadayı says. Membership of the Council of Europe also necessitates compliance with the court.

“As such, we chose the location for our activism as the ECHR. Here, we voice our concerns about the Turkey dossiers before the court and our requests from the European Council regarding the application of the court’s rulings in Turkey,” he adds.

The current Turkish government cannot even tolerate the slightest criticism of citizens, Alpay says, making it “impossible to seek legal solutions on political cases in the country.”

“It is as though we are waiting on the time of death for the judiciary to be called at this point,” she adds.

Moves like Erdoğan’s appointment to the Constitutional Court last month the former Chief Public Prosecutor of Istanbul, known for his close ties to the government and the prosecutor of many high-profile criminal cases that have been at the heart of the current backlash against democracy and human rights violations in Turkey, are raising concerns about the country’s judiciary at the highest level.

The country ranked second after Russia in failure to execute judgements by the European Court of Human Rights (ECHR), according to an annual report by the EU’s Council of Europe issued in April 2019.

“This figure alone shows where Turkey is at in terms of the state of law,” Kabadayı said. “When you look at the de facto situation in the country, it becomes evident that these figures reflect the truth.”

Turkey’s careless distancing from the West and Europe is a problem that should be of concern to everyone, according to Kabadayı.

There are currently 146 journalists under arrest in Turkey, Alpay says, stressing that their group expects for the ECHR to examine in detail the case of arrested lawyers in Turkey.

Lawyers in Turkey are fighting to carry out their profession free from any political pressure, Alpay notes, adding that they will “fight until the very end to protect this right.”