The Nazi roots of Muslim Brotherhood 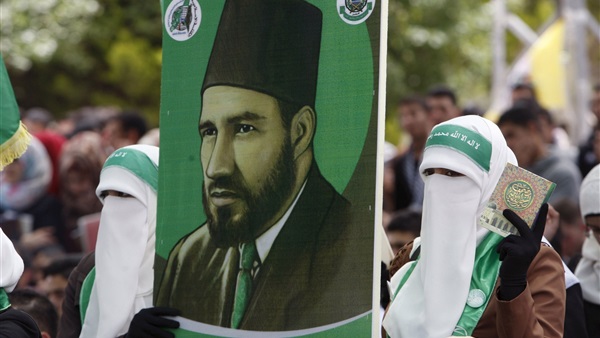 After years of causing disruption on the streets of Egypt, on 30 June 2012, the Muslim Brotherhood’s leader Mohammed Morsi was sworn in as the country’s first democratically elected president.

As his first year in power dragged on, with no sign the economy was improving, inflation had doubled, the cost of living had risen dramatically, and unemployment was fast getting worse, causing disquiet in the country.

After hurriedly drafting a new constitution, in which he granted himself broad powers above any court, he turned himself into a virtual dictator.

Already, in the eyes of the majority of Egyptians, Morsi’s fledgling government was far too undemocratic, as under his government, clerics were able to intervene in the law-making process, whilst stripping away legal protection from minority groups, a pointier towards a return to the Brotherhood’s style of Nazi rule and policies, favoured by its past leaders.

On 3 July 2013, with thousands of people taking to the streets calling for the removal of Morsi, the embattled president still refused to step aside, and so, the military under General Abdel Fattah el-Sisi was forced to oust him, suspending the constitution until new elections could be held.

With Morsi being placed under house arrest, the people were ecstatic, and celebrations took place, with fireworks being set off on the streets of Cairo.

Since it was founded in north-eastern Egypt in 1928 by Hassan al-Banna, the tentacles of the Muslim Brotherhood (MB) have spread, and over the years, as it grew in popularity, this so-called political and social revolutionary movement has now extended its reach into Europe and North America.

Born on October 14, 1906, in Al Mahmoudeya, a rural Nile Delta town in Al-Behaira Governate northwest of Cairo, Hassan al-Banna was the son of a local imam, who wrote books on Muslim traditions, and taught at the local Madrass, where Hassan later received his first lessons in Islam.

Just like Hamas, al-Qaeda, Islamic Jihad and ISIS, the Muslim Brotherhood base much of their ideology on the teachings of several educators and philosophers who were influenced by Adolf Hitler.

Such was al-Banna’s hero worship of the Nazi leader, he had Hitler’s autobiography and political anthology, Mein Kampf (My Struggle), translated into Arabic, changing the title to My Jihad.

Al-Banna was so obsessed with the Nazis, he also had copies of their anti-Semitic newspaper Der Sturmer, a tabloid published by the infamous Jew hating Julius Streicher, adapted to suit the Arab world, with its despicable anti-Semitic cartoons.

Throughout his leadership of the Muslim Brotherhood, al-Banna closely adhered to Hitler’s stance of eliminating all those that stood in the way of his party’s progression, his belief being that by removing all liberal opponents, and those wanting to see reform and change, it would make it easier to unite Arab society.

Along with the Nazi ideals that al-Banna incorporated into the Muslim Brotherhood, came an intense hatred of Jews, and a plan to eradicate all Jews in the Middle East.

Through his leadership of the Palestinian Muslim Brotherhood, his infamous exploits aided in the creation of one of the most hideous political terror groups ever, one that blended Muslim beliefs with all of the vile ideologies created by the Nazis, spawning many groups that followed the same cause.

With al-Husseini having lived in Palestine during the start of the First World War, he had sworn his allegiance to the Ottoman Empire, and had become an officer in the Ottoman Turkish army.

It was during this time, he had found himself assigned to the Forty-Seventh Brigade, which was stationed in the city of Smyrma, and whilst serving there, he had become a willing participant in the Armenian genocide, during which one-and-a-half million Christians were reportedly slaughtered by Turkish troops.

This event had twisted al-Husseini’s mindset, turning him into a leading advocate of creating an Islamic Caliphate, which was envisaged by all of his followers, and which they believed could only come about through the annihilation of all Jews and Christians living in the Middle East.

It was on 3 January 1919, the Zionist leader Chaim Weizmann and the Arab leader Emir Feisal, son of the King of Hejaz, came to an agreement over the implementation of the Balfour Declaration, which came to fruition from the November 1917 British government’s pledge to bring about “the establishment in Palestine of a national home for the Jewish people”, with an added proviso that “nothing shall be done which may prejudice the civil and religious rights of existing non-Jewish communities in Palestine.”

In 1920, in response to the signing of the agreement, violent rioting took place between Jews and Arabs, and through his response in organizing opposition to the agreement, al-Husseini became a leading figure in the nationalist campaign to destabilise the British mandatory government in Palestine.

With the rioting over, al-Husseini was charged with incitement over his role in the four-day uprising, which had left 47 Jews dead and dozens more wounded, for which he received a ten-year sentence in absentia, and to escape imprisonment, had fled the country for Syria.

Then in July 1922, without any form of consultation with the Palestinian population, the League of Nations approved the terms of the British Mandate over Palestine, the objective of which was to secure the establishment of the Jewish national homeland, as laid down in the Balfour Declaration.

It was during 1922, a year after the death of Haj Amin al-Husseini’s half-brother Kamel, who was the Mufti of Jerusalem, the British authorities were desperate to restore order, and coming up with the new title of Grand Mufti of Jerusalem, they bestowed it upon Amin, in the hope that his new position might quell his violent tendencies.

During the period that al-Husseini held the position of president of the Supreme Muslim Council, he had the power to appoint or dismiss judges and other officers connected to the Muslim religious court, and during his time in office, in the same way that Morsi had later planned, he imposed a rigid form of Islam in Palestine, which he enforced with an iron fist.

Throughout al-Husseinis’ tenure, many riots had taken place in Palestine, which resulted in dozens of deaths, caused by his associates spreading false rumours about Jewish activity, to incite the Arab population to revolt.

Squads of Berlin police goose-step past the reviewing stand as a high military official gives them the Nazi salute during a parade in the Lustgarten, Berlin, March 20, 1934. (File photo: AP)

Squads of Berlin police goose-step past the reviewing stand as a high military official gives them the Nazi salute during a parade in the Lustgarten, Berlin, March 20, 1934. (File photo: AP)

But it was the aftermath of the riots in 1936, which became known as the Arab Revolt, when al-Husseini recruited armed militias to attack the Jews, things got completely out of hand. With the Jews now having fully organized themselves, the riots couldn’t be quelled, and the British had to use military force.

In late 1937, due to his part in the riots, al-Husseini was stripped of office, and in fear of arrest, escaped into exile in Lebanon. Then after moving onto Iraq, which at the time was controlled by a pro-Axis regime, he eventually headed for Germany, where he assisted the Nazis in anti-Jewish propaganda, and aided in the recruiting of Muslims for a special SS division, with most conscripts coming from Bosnia.

Such was al-Husseinis’ intense hatred for the Jews, with the beginning of Hitler’s Final Solution program coinciding with his arrival, many observers believe he actively participated in the Holocaust, and this theory was furthermore enforced through the testimony of Adolf Eichmann’s deputy, Dieter Wisliceny at his trial in Nuremberg, when he insisted that al-Husseini was one of the main initiators.

It was also established, while collaborating with the Nazis, the Mufti of Jerusalem was funded by money confiscated from detained Jews destined for the concentration camps, and that the Nazis also paid for his armed militias.

During World War II, the Muslim Brotherhood in both Egypt and Palestine strongly supported the Nazis, an association that continued until the fall of the Third Reich. Throughout those years of support, the Muslim Brotherhood’s leadership would organize mass demonstrations, meting out extreme violence against the Jewish community.

They marched through the streets calling out slogans such as: “Down with the Jews”, and it was during this time, the slogan: “Jews out of Egypt and Palestine” was coined, and another infamous cry: “The Koran is our constitution, jihad is our way, Martyrdom is our desire”.

It also has to be remembered, Hamas was created in December 1987 as the Muslim Brotherhood’s armed wing in Palestine, its leader Shaykh Ahmad Yassin had joined the Brotherhood in the 1960s, and with him being a great admirer of Hassan al-Banna and other MB members, Hamas’s covenant mirrors that of its founder party.

So, with al-Qaeda, Islamic Jihad and ISIS also having come out of Brotherhood’s stable, the question has to be asked: what future monsters will it spawn?