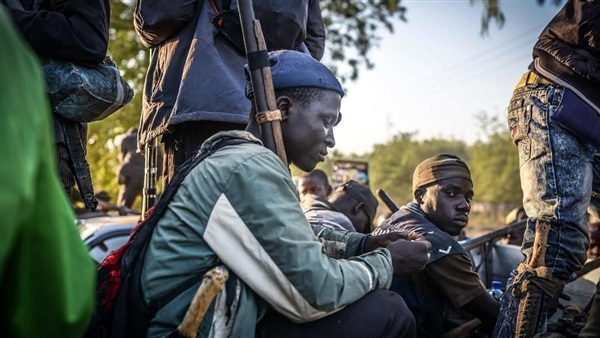 Observers of terrorist organizations in Africa will find the most dangerous of them are Boko Haram in Nigeria and the Al-Shabaab movement in Somalia. In recent times, under the security pressure on the two movements, their brutality has increased, especially Boko Haram in Nigeria, which has reduced its resources recently, so it has turned to new specific operations to increase its funds, namely kidnapping schoolchildren and demanding a ransom for their return or release.

On December 15, Boko Haram leader Abubakar Shekau announced in an audio recording the terrorist movement's responsibility for the kidnapping of hundreds of high school students in northwestern Nigeria, according to AFP.

Nigerian President Muhammadu Buhari condemned the attacks and ordered security beefed up in all schools, while educational institutions in the state of Katsina were closed.

On Monday, the army confirmed that it had located gang areas and indicated a military operation.

AFP indicated that the kidnapping was initially attributed to armed groups that terrorize the population in this unstable region, where kidnappings for ransom are frequent. The kidnapping incident represents an important shift in the expansion of jihadist groups’ influence in northwestern Nigeria.

Two days after the leader of the organization claimed responsibility for the kidnapping of students, on December 17, 344 students who had been kidnapped were released. A spokesman for the governor of Katsina said that the released students were in good condition. However, it is unclear whether all of the boys have been released.

In his statement, the Nigerian spokesperson, Abdul Labaran, said that the boys had been transferred to the regional capital, Katsina, and would be reunited with their families soon.

In many cases in the past, ransoms were paid in one way or another and the kidnapped were released, while Boko Haram used the ransom money for armaments and training.

Among the most brutal operations in recent times, Boko Haram fighters slaughtered at least 43 farmers who were working in rice fields in the city of Maiduguri in northeastern Nigeria and wounded six others, according to an anti-militant armed faction in late November.

The kidnappings were not a tactic of the movement, but it was brought by a wing that called itself the Islamic State of West Africa. This faction was trained by al-Qaeda in the Islamic Maghreb (AQIM), which had a role in the group's transformation into violence and terrorism about twenty years ago.

The most prominent of the kidnappings carried out by Boko Haram were in the year 2004, when 200 girls were kidnapped.

To this day, there are still many kidnapped girls in the hands of Boko Haram, who claim that the girls do not want to return to their families.

The kidnapping of girls in that year while ISIS was controlling large areas of northern Iraq, drawing the world's attention to the extent of terrorism carried out by Boko Haram in Nigeria and threatening the countries of the Lake Chad basin, as the Nigerian government was unable to contain the group's actions. Then the kidnappings were repeated, and one of them was in February 2018, when the group kidnapped a hundred students and detained them for a month before releasing them.

The movement began in 2002 as a movement with peaceful activity, when it split under the leadership of Muhammad Yusuf from the Ibrahim Zakzaky group under the name of the Ahl al-Sunnah Group for Preaching and Jihad. However, influenced by AQIM, it began to turn towards violence and adopting extremist ideas.

The group turned to terrorism after 2008 and moved towards more militancy when Shekau took control of it after the death of its first leader in detention.

Shekau took the movement to an unprecedented state of brutal terror, to the point of using children in suicide bombings. The movement declared its allegiance to ISIS in March 2015.

Like all terrorist movements, Boko Haram is bullying weak civilians and young schoolchildren because they are easy targets in areas where the security grip is weak.

As for the peak of Boko Haram's terrorist activities, it was in 2014 and 2015, after which the pace of these acts decreased due to the lack of funding and the intensity of military pressure exerted by the government forces.

As the battle against Boko Haram rages on, Ibrahim Zakzaky’s group, loyal to and funded by Iran, appears quiet and silent in its tactic of waiting for the fate of its detained leader.

The Zakzaky group, banned for six years, is calling for the establishment of a system of government similar to the Iranian regime. The group relies on the Shiites of Nigeria, whose numbers reach nearly 5 million people. The state is combating this group and considers it an Iranian tool hostile to the authorities. The confrontations had previously caused dozens of deaths and ended with the arrest of the group’s leader.

The conflict between government forces and Boko Haram militias has been going on for 12 years, killing tens of thousands of people and displacing millions.

However, the continuous military pressure was not able to eliminate the movement, although its influence had diminished, heavy losses were inflicted on it and much of the territories it controlled were lost.

The movement, which finds a social support in the poor areas, has been able to return to its activities and carry out sporadic terrorist attacks in the country and many kidnappings and intimidation of the people.

The results of the military operations were always short-lived, and as soon as the government forces moved away, the movement's militias would return again. The Lake Chad Basin countries formed joint forces to confront Boko Haram, but these joint forces were not very effective.

Although regional cooperation is very important in fighting the movement, the participating countries refrained from participating with all their energy due to some national sensitivities, which made the joint force practically and structurally weak.

Experts in terrorism affairs believe that military action alone will not eliminate the group and that what is really needed are comprehensive social and humanitarian programs to confront the motives that cause the emergence of extremism in the areas that constitute a social incubator for the movement so that no justifications remain for its existence.

These programs, which will result in providing job opportunities for the local population and supporting development projects, will lead to an improvement in the quality of life and thus achieve an economic and social breakthrough that distracts young people from joining extremist and terrorist movements, provided by international institutions, in cooperation with the European Union, which has shown remarkable willingness to provide the necessary assistance to rehabilitate former fighters who are convinced to leave the movement and return to normal life.

Boko Haram may not end quickly in Nigeria, but perseverance and patience in implementing the socially and humanitarian programs required to neutralize terrorist groups will weaken the movement's approach.

However, the problem of external support remains alive, and preventing foreign support needs global support, especially from the European Union, to block the smuggling of weapons and money to these groups.

At the same time, it is necessary to strengthen the military force and revive the Five-Year Alliance of the Lake Chad Basin countries to confront terrorists and protect civilians. However, it is necessary to pay attention to some other factors that constitute pillars that contribute to providing a suitable environment for terrorist movements, and what applies to Nigeria may apply to other regions of the world.

Corruption and economic and political challenges hinder the government’s effort to combat terrorist acts. Also, the poor distribution of wealth in Nigeria, an oil-exporting country, is the cause of popular discontent, which results in a hidden willingness to engage in opposition to the state that may turn into a terrorist act.