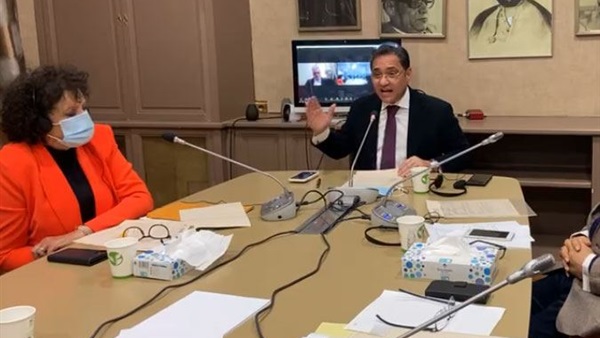 PARIS – Director of the Middle East Center for Studies in Paris (CEMO), Abdelrahim Ali, revealed Tuesday that the Muslim Brotherhood took root and grew in European capitals like Paris only with the aim of controlling the West.

This is a process, he said, that takes place over three stages.

He added that these three phases includes the founding of social institutions that bring French Muslims and migrants together.

There were seven of these institutions in 1989, Ali said. In 2005, there were 250 societies affiliated to the Muslim Brotherhood in France.

He noted that the names of the umbrella organizations of all these charities change according to conditions on the ground.

This gives the impression that the Muslim Brotherhood speaks for all French Muslims, Ali said.

He noted that the second phase of Brotherhood control over societies also includes economic empowerment.

This empowerment, he said, comes through direct and indirect financing through donations and bank transfers.

It also comes from the returns of Islamic trade and halal trade, Ali said.

This financing, Ali said, allowed the Brotherhood to offer financial support to poor families in districts overlooked by the French government.

Ali noted that the third phase of Brotherhood control includes cultural empowerment through the establishment of cultural centers and schools.

He added that this empowerment also comes through support to private education.

This education, he said, allowed the Brotherhood to spread its ideas about upbringing throughout the whole of France.

Ali said this thinking is dangerous in that it teaches every Muslim living in Europe that the continent has to turn into an Islamic continent that applies Islamic law, even if the majority of people in the continent is non-Muslim.

The Muslim Brotherhood identifies an Islamic state as one that applies Islamic law, even if it does not contain a majority of Muslims, Ali said.

He added that this empowerment opens the door at the end of the day for political empowerment which also includes influencing the results of elections.

The Brotherhood does all this to become an important part of the political equation in the countries where it exists, Ali said.

This is dangerous because it will make politicians and governments obliged to succumb to the demands of this organization, he added.

Ali's remarks came during a seminar on Tuesday on France's new bill to prevent radicalism.

The seminar, which took place at CEMO's headquarters in Paris, was titled "Is France's new bill on separatism enough?"

It was held on the eve of discussions on the bill by the French cabinet.

Apart from Ali, a host of other dignitaries spoke in the seminar, including Jacqueline Eustache Brinio, a member of the French Senate and the Rapporteur of the Committee on Political Islam in the Senate, renowned French writer Yves Thréard, who is the editor-in-chief of the French daily morning newspaper, Le Figaro, and political Islam specialists Emmanuel Razavi and Alexandre Del Valle.

Also speaking in the seminar was noted writer Gil Mihaely.