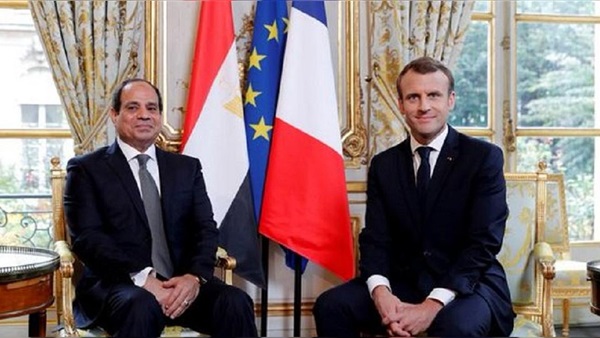 Egypt’s President Abdel-Fattah El-Sisi will be going on an official two-day visit to France on Sunday, French President Emmanuel Macron's advisor for North Africa and the Middle East, Patrick Durrell announced on Thursday.

According to the Elysée, the Egyptian president will meet his French counterpart Emmanuel Macron on Monday.

The visit follows Macron's state visit to Egypt in January 2019.

France’s Emmanuel Macron will welcome al Sisi, Monday to discuss number of the regional crises, especially in Libya and tensions in the eastern Mediterranean.

According to a statement issued by the Elysee, Sisi’s visit aims to strengthen relations between Paris and Cairo which is the strategic partner for stability in the Middle East.

During the visit, Sisi will be meeting with Foreign Minister Jean-Yves Le Drian.

Patrick Durrell announced Sisi will visit the international university campus in Paris to lay the foundation stone for the Egyptian House.

Macron's advisor also revealed that Sisi will meet over a work lunch at the Matignon Palace, where several contracts will be signed in civilian fields includes energy, transportation, medicine, education, as well as military affairs.

France Development Agency will also support the social field in Egypt with 150 million euros as a soft loan.

There is also a French aid in the academic and educational fields.

The advisor said that the Egyptian president is expected to visit the two chambers of the French Parliament.

President Macron's advisor explained that the French-Egyptian partnership is continuing and there is consensus in various fields and that Egypt is a pivotal partner for France in the Middle East and Africa.

He also added that bilateral relations are in continuous development at all levels, as Egypt is part of the strategic partnerships of France, European countries and America.

With regard to the Libyan file, Macron's advisor said that we are working with Egypt in Libya in coordination with the United Nations.

The two leaders will also address the Palestinian-Israeli file and listen to the viewpoint of Egypt, as it is the pioneer of peace in the Middle East and has a historic role in easing tensions and saving the peace process between the Palestinians and the Israelis.

President Macron's advisor told Al-Bawaba news that France totally stands behind Egypt in the war against Islamists who take the approach of political Islam as a work map and affirmed that France’s respect and appreciation of all religions and religious values and principles, hailing Egypt as a model of moderation.

He also referred to Egypt’s approach in establishing values of co-existence, freedom of worship and respect of the other.

He also praised Egypt’s efforts under President El-Sisi to allow dialogue among people of different religions.

Patrick Durrell also told Al-Bawaba news that there are positive signals as Joe Biden stressed that his term will not be a third term for President Obama who sponsored the Arab Spring.

On Turkey, Macron's advisor explained that President Erdogan is troubling Europe with his provocations in the Mediterranean and in Libya and in his endeavor to control its oil and gas sources and in the Cypriot territorial waters.

He said that France agrees with Egypt that Turkey supports terrorism by sending mercenaries.