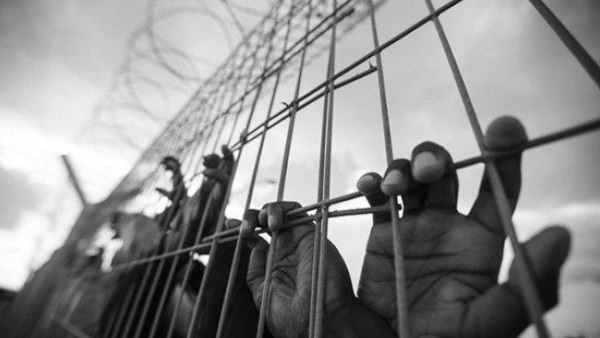 A former rebel commander accused of involvement in killing civilians, rape and eating pieces of a schoolteacher’s heart during Liberia’s civil war has decried his long pre-trial detention as proceedings began in Switzerland on Thursday.

The trial is one of a handful of cases brought to international courts in connection with the west African country’s 1989-2003 civil war, in which hundreds of thousands of people were killed.

The defendant, 45-year-old Alieu Kosiah, denies the charges. His lawyer said Kosiah, who was arrested in Switzerland in 2014, was not present in the area when the alleged crimes were committed.

Dressed in a shirt and black suit, Kosiah listened attentively and regularly took notes, and briefly responded to opening questions from the judge. Asked if he knew what crimes he was accused of, he said: “Yes, of course.”

He later interrupted proceedings, shouting: “I was targeted … I have been six years in prison pre-trial,” before apologising for the outburst. A witness in court said he appeared to be shaking.

Kosiah’s alleged crimes are listed by the Swiss court as “recruitment and use of a child soldier, forced transportation, looting, cruel treatment of civilians, attempted murder, murder (directly or by order), desecration of a corpse and rape.”

Kosiah, a teenager when the conflict involving thousands of child soldiers began, became one of the “big men” in the rebel faction Ulimo, which fought against the troops of the warlord Charles Taylor in the remote Lofa county in the 1990s.

The indictment says he killed or participated in the killing of 18 civilians, forced a displaced woman to be his “wife”, raping her repeatedly, and recruited a 12-year-old boy as his personal bodyguard.

In one alleged incident described in the indictment, Kosiah joined fighters in eating slices of an dead man’s heart off a metal plate. Acts of cannibalism were not uncommon in the conflict.

Kosiah, who has given testimony to Swiss prosecutors, has not yet pleaded in court and is due to be heard next week.

“According to Mr Alieu Kosiah, one of the big problems with this case is he had not yet arrived in Lofa [county] at the time of the crimes he supposedly committed there,” his lawyer Dimitri Gianoli told Reuters before the trial. “[He] has always been very clear on his whereabouts in Liberia and the court filings include testimonies collected in Switzerland that confirm it.”

The case before a three-judge panel at the federal criminal court in Bellinzona is a first for Switzerland under a 2011 law allowing prosecution for war crimes committed anywhere.

Lawyers for Liberian victims are opposed to a court decision to postpone their hearings until next year due to Covid-19, effectively preventing them from hearing Kosiah in person. The court is also mulling video link testimonies.

“It would be cruel to deny our clients the chance to be present with us,” Alain Werner, a lawyer representing four plaintiffs, said in court, explaining that it could help them heal.

Gianoli said their presence was not necessary. “Your tribunal is not a theatre,” he told the judges.

Liberia has never prosecuted its war criminals, despite a recommendation to do so by its truth and reconciliation commission more than 10 years ago. Former warlords retain positions of power and witnesses are reluctant to come forward.