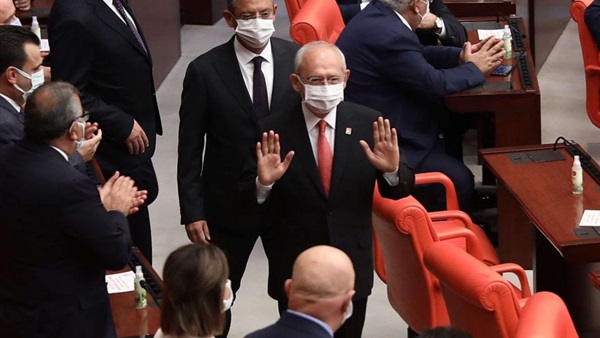 The number of death threats directed against opposition figures in Turkey has grown following remarks made by opposition politicians condemning the imprisonment of high-profile political figures in the country.

Kemal Kılıçdaroğlu, the head of the main opposition People’s Republican Party (CHP), has received a series of severe threats for criticising the imprisonment of Selahattin Demirtaş, leader of the pro-Kurdish People’s Democratic Party (HDP) and others.

Not long after this speech, he was threatened by infamous mobster Alaattin Çakıcı, who accused him of treason for defending Demirtaş. In an obscenity laced hand-written letter, Çakıcı warned the CHP leader to “be sensible.”

Çakıcı was arrested in 2004 on numerous charges including murder, but he was released in April as part of an amnesty bill to reduce prison populations during COVID-19. His release was long sought by the Nationalist Movement Party (MHP) leader Devlet Bahçeli, whose party considers Çakıcı a hero for targeting members of the Kurdistan Workers’ Party (PKK), PKK supporter Kurdish businessmen and activists in extrajudicial killings.

Since Çakıcı’s threat against Kılıçdaroğlu, other Turkish opposition figures have come under fire in often violent or deeply partisan attacks from pro-AKP media.

Melih Gökçek, a former AKP mayor of Ankara for over two decades until 2018, took to Twitter over the weekend and shared a video with members of CHP as well as other opposition parties. In the video, these MPs were taking critical positions on Turkish foreign policy decisions including the purchase of the S-400 Russian missile system.

Attached to the video, Gökçek wrote in caps lock “HERE IS THE REAL FACE OF THE OPPOSITION!”

Columnist with Türkiye newspaper Fuat Uğur penned an article in on Saturday, in which he describes how pro-government media has spoken about plots to kill Kılıçdaroğlu. He wrote of one particular scenario in which the CHP leader could be harmed.

“One of the FETO pro-crypto kamikazes will point the trigger at Kemal Kılıçdaroğlu this time, just like the Karlov assassination,’’ Uğur wrote.

“However, after the unsolved assassination, the person to be accused will be Alaattin Çakıcı, who is a relative of Devlet Bahçeli, the leader of the MHP, which is the partner of the ruling People's Alliance. In other words, a perception will be created as if he was assassinated by power," he said, referencing the killer of Russian ambassador Andrey Karlov in 2016. The assailant was accused of being a Gülenist by President Recep Tayyip Erdogan and his government after the act.

These threats in part stem from an overall partisanship that has increased in recent months amidst economic and foreign policy challenges. In early November, Erdoğan has promised to initiate economic and judicial reforms to resuscitate an anemic lira. He has also opened the door to warming relations with both the European Union as well as the United States.

After Kılıçdaroğlu’s remarks on Demirtaş, the Ankara’s public prosecutor’s office announced that it prepared a summary of proceedings that would lead to the removal of his parliamentary immunity so he can be tried on charges of “praising an offense and an offender.” The impetus was allegedly a complaint filed by the MHP against the CHP leader.

Bahçeli accused Kılıçdaroğlu of being sympathetic to the PKK and defended Çakıcı as an “ülkücü” or a member of the Grey Wolves, a Turkish ultranationalist organisation with ties to the MHP. He also referred to the accused mobster as his “comrade”.

“Kılıçdaroğlu cannot change the agenda that works against him…” Bahçeli tweeted on November 18. “Cooperation with the PKK will certainly bear the democratic cost of their dialogue with FETO.”

FETO is Ankara’s abbreviation for the Fethullah Gulen Terrorist Organisation, who Ankara accuses of being a terrorist group. Supporters of Fethullah Gulen, an early ally of Erdogan living in exile, are accused of orchestrating the failed July 2016 coup attempt against him.

CHP Deputy Leader Engin Özkoç slammed MHP as acting as a “hitman” for Erdogan and the AKP by pushing for charges against Kılıçdaroğlu.

“The MHP has to return to the realities of the country and should seek solutions to the problems of the people. Those who attempt to silence the opposition should never forget that neither our Chairman Kemal Kılıçdaroğlu nor our lawmakers will give up on telling the truths and protecting people’s interests,” Özkoç said.

According to Özkoç, stripping Kılıçdaroğlu of his immunity so he could be prosecuted for political statements would be a first in the history of the Turkish republic. Any decision to lift immunity of an MP would be made by the Grand National Assembly’s speaker, whose seat is currently filled by AKP member Mustafa Şentop.

The motion to lift Kılıçdaroğlu’s immunity has been sent to the Parliamentary Speaker’s office, but would need to be voted on to go into effect. The vote won’t happen until lawmakers decide to include it in the agenda.

As of August, 1,020 motions on 175 deputies are waiting at the parliamentary justice commission. The majority are on the two largest opposition blocs, with 54 deputies from the pro-Kurdish left-wing opposition Peoples’ Democratic Party (HDP) facing 774 motions and 95 deputies from the centre-left CHP facing 225.

Earlier in June, three opposition deputies lost their parliamentary statuses when the general assembly moved to vote on the motions on them. In November 2017, 12 deputies from the HDP were detained and nine of them - including Demirtaş himself - were arrested after a constitutional amendment lifted all parliamentary immunities