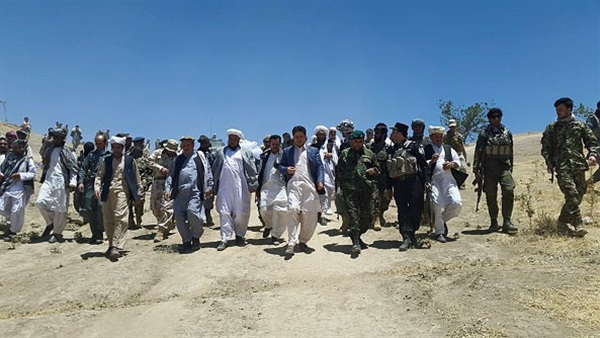 In conjunction with the approach of reaching a peace agreement in Afghanistan, which has been exhausted by wars and conflicts for decades, the forces of terrorism are trying to spread terror and panic by launching more attacks, the most recent of which were two separate attacks that took place on Sunday, November 29, which resulted in the killing of dozens of Afghan security forces and a senior local official.

Two terrorist attacks targeted an army base in Ghazni province, eastern Afghanistan, and a government official's convoy in the southern province of Zabul, killing and wounding dozens of security forces and civilians.

This comes as the Afghan government and the Taliban movement on Saturday, November 28 agreed on procedural rules to engage in peace talks to end 19 years of conflict in the country.

Taliban spokesman Muhammad Naeem tweeted from the Qatari capital, Doha, that the conditions, which consist of 21 articles, were approved by the two sides to break the stalemate that lasted for weeks.

The peace agreement signed by the United States with the armed movement on February 29 requires the Taliban to cut ties with all terrorist groups, including al-Qaeda, in exchange for the withdrawal of US forces from Afghanistan.

The United States has begun withdrawing its forces from the country, and it is scheduled to reduce the number of its forces from 4,500 to 2,500 by January 15, with more personnel to be withdrawn by May.

The Afghan government has expressed concern about what it considers a premature withdrawal that may leave the country in a state of civil war.

Recent attacks by ISIS have reduced the level of optimism among the afflicted people of Afghanistan, as a major attack launched by the terrorist organization last week resulted in the deaths of at least eight people and the injury of more than 30 due to missiles striking residential areas in the Afghan capital, Kabul.

The Afghan Ministry of Interior said that more than ten missiles fired from a truck inside the city hit a number of buildings and vehicles, struck the center and north of the capital, and reached the heavily fortified area that includes embassies and international companies. The Iranian embassy in Kabul said that missile shrapnel hit its compound, but no one was injured.

A video clip published on the internet showed schoolgirls running in panic as explosions reverberate behind them. The Taliban has denied involvement, saying in a statement that it does not shoot indiscriminately into public places.

However, ISIS claimed responsibility for the missile attacks, which came hours before the meeting of US Secretary of State Mike Pompeo with Taliban representatives and representatives of the Afghan government in Doha in order to resume peace talks.

The United States and the Taliban are close to reaching a peace agreement to withdraw American forces. The administration of US President Donald Trump has announced plans to withdraw 2,000 soldiers from Afghanistan by mid-January.

Afghan officials emphasized that the Afghan government and the Taliban had reached a settlement on thorny issues that have been hindering the progress of peace talks for weeks, paving the way for progress in the negotiations.

It is worth noting that the Trump administration has closed at least ten military bases in Afghanistan since the signing of the peace agreement between the US government and the Taliban in February, according to a report published by the Washington Post, which made clear that closing the military bases is part of the complete withdrawal of US forces from Afghanistan, as stipulated in the peace agreement with the Taliban, in an effort to end a conflict that has lasted for more than 18 years.

A US Defense Department official told CNN on Friday, November 27, that the US aircraft carrier USS Nimitz is on its way back, coinciding with the withdrawal of US forces from Afghanistan and Iraq on January 15.