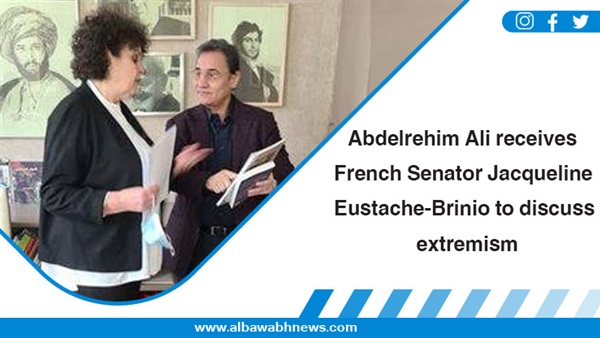 PARIS (Special to The Reference)
طباعة

Eustache-Brinio: “Egypt is an ally, and the French Foreign Ministry erred in its criticism of the investigation of Egyptian citizens.”

“The separatism law is the beginning of the end for extremist organizations in France, especially the Brotherhood.”

“We are very kind to Qatar, and I think that it threatens French national security by sponsoring the Brotherhood.”

“Erdogan is Europe's enemy number one, and we should be clearer and firmer with him.”

Abdelrehim Ali, chairman of the Board of Directors of the Center for Middle Eastern Studies in Paris, held a three-hour discussion with French Senator Jacqueline Eustache-Brinio, head of the French Senate’s Inquiry Commission on “The Development of Islamic Extremism and Ways to Combat It”, in the presence of French journalist Alexandre del Valle, managing editor of Atlantico, and Dr. Ahmed Youssef, executive director of the CEMO Center.

The meeting dealt with several issues revolving around the danger of the Brotherhood in the West, the role of Qatar in financing terrorism, what Erdogan is doing in Europe, the role of some human rights organizations in support of extremist societies, and French-Arab cooperation in the field of combating terrorism.

Eustache-Brinio proposed many aspects of her ideas, and she welcomed French President Emmanuel Macron's speech on October 2, in which he put in place a number of new regulations that reduce the margins of the Brotherhood movement in France. She said the law against separatism that Macron will present to the French parliament on December 9 is a preliminary act that will eliminate the chronic problem of extremism, which has plagued France for the past twenty years, but she emphasized that this work may take years.

The senator added that Macron found that France needed to neutralize the strength of the Brotherhood, which separates Muslims from French values.

Meanwhile, Ali said that the French president’s crisis is the confusion between Islam as a religion and Muslims in France as a group, who must abide by French laws, when he stated that Islam is suffering a crisis worldwide, which angered Muslims around the world and which the Brotherhood exploited. Rather, Ali said that Islam has been hijacked in France by the Brotherhood, which is the real French crisis.

The proof of this is that the frictions attributed to Muslims and their development into terrorist operations did not begin until about twenty years ago, while many generations of Muslims had lived in France for decades prior without the slightest problem.

Eustache-Brinio replied that this statement was 100% true, adding that we must confront those who hijacked Islam for the benefit of their ideas, preserve the values of the republic, and commit them to all those who live on its soil with full respect for all religions.

“We must confront extremism, regardless of its source, whether it is Muslim or Christian,” she said, adding that she personally works against extremism in all its forms.

Egypt is pivotal in the fight against terrorism

Regarding Arab-French cooperation in the field of combating terrorism, Eustache-Brinio said that Egypt is a country that has many keys to fighting terrorism, especially the Brotherhood organization in the Middle East, and Egypt has a great position in relation to France. It is a luminous country throughout history, with its ancient civilization, and it has a wonderful model of coexistence between religions. Copts and Muslims live as brothers in Egypt.

In response to a question about the problem of human rights organizations that intersect in their work with the Brotherhood and their sponsors, the French senator replied that the Brotherhood is France’s enemy as well, and unfortunately some organizations in the name of human rights do strange things, but they are against the national security of countries and against the orientations of states.

Ali then interrupted her, reminding her of the French Foreign Ministry’s statement regarding the investigation of Egyptian citizens inside Egypt and with the knowledge of the Egyptian Public Prosecution under the lawsuit of human rights.

The senator said that this is not the role of the French Foreign Ministry, especially as it does not have the elements that qualify it to judge something of its merits as it affects the security of Egypt, which is an internal and sovereign matter.

Ali asked her what the role of the French Senate is in such matters, and she answered that the Senate has a great role in drafting international policy and its orientations, especially when the parliament has taken some decisions against the orientations of the French state when it erred because it affects the interests of the French people.

“I believe that the French Foreign Ministry, in criticizing the investigation with Egyptian citizens, does not know the truth of its role, so it should not criticize the government. The Egyptian government in particular is working with us as a strong ally against terrorism and extremism. Diplomacy in international relations must define enemies and friends. I believe that the French Foreign Ministry is ignorant of the distinction between them and that it should be aware that in the name of human rights we should not do anything, especially since the Brotherhood uses human rights organizations for their benefit. But we must define the supreme priorities and interests of states and national security, and the peculiarities of countries must be respected. Every country has peculiarities, norms and traditions that we must respect,” Eustache-Brinio said.

Ali asked Senator Eustache-Brinio about Qatar’s role in financing and supporting terrorism, and she said, “We are very kind to Qatar. The government thinks it needs it because of the investments and the economy, but I think it threatens French national security by sponsoring the Brotherhood.”

“Do you think Qatar is trying to play at home in France through politicians or media people, as is often reported?” Ali asked.

“We do not have evidence for that, and the French political system is under very tight control. Even I have to present a statement of all expenses and revenues, and they are holding us accountable even for 15 euros. This is a welcome thing in France. So I cannot talk about a matter for which I do not have evidence, for it is forbidden to receive support from companies as well as from abroad for several years,” the senator responded, adding that Qatar is smarter than this, as it invests in France in real estate and sports only.

Ali asked the senator whether she is following Turkish President Recep Tayyip Erdogan’s moves in the Mediterranean and in Libya, and why France does not respond strongly to him. The senator said that Erdogan is Europe’s number one enemy now and that they will never allow him to enter the European Union.

“I am one of the parliamentary representatives who refuse to enter Turkey into the European Union, and we in France are fighting Erdogan. We have banned the Grey Wolves organization, which is one of his arms in France, but this is not enough from my point of view. We must be clearer and firmer with Erdogan, as no one wants to talk to him. We stop talking to him and confront him with all firmness here and in the Eastern Mediterranean,” Eustache-Brinio said.

The discussion and exchange of visions and ideas continued for more than three hours, interspersed with an Egyptian lunch, where the French senator and journalist expressed their admiration for Egyptian moussaka, lentil soup and stuffed vegetables.

At the end of the meeting, an agreement was reached between Senator Jacqueline Eustache-Brinio and Abdelrehim Ali on joint cooperation and exchange of experiences with the CEMO Center for Studies, as it is the best Arab think tank in Europe. The senator accepted to attend upcoming conferences and seminars at the center. “We and the center are working on one front against extremists, terrorists and the owners of the political Islamism movement,” she said, adding that she has seen the content of the center’s messages and its publications and that she believes it to be an additional force for France in the face of extremism and the war against terrorism and the exchange of hatred.

At the end of the meeting, Ali gave a group of his books and research translated into French to Senator Eustache-Brinio, in the hope of upcoming meetings in which the global front against extremism and political Islam will be discussed and inaugurated by a number of journalists, authors and researchers specializing in this field.