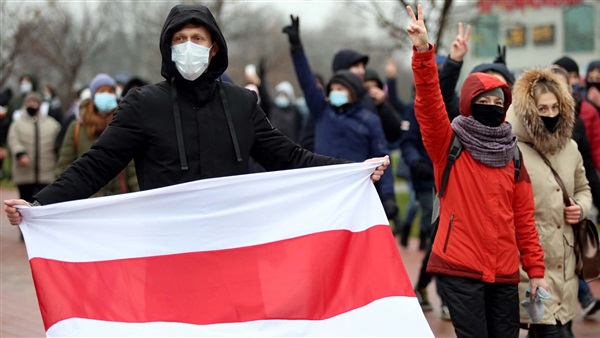 Tens of thousands of Belarus opposition protesters took to the streets on Sunday, the latest large-scale rally against President Alexandre Lukashenko's contested re-election.

For more than three months Belarus has been gripped by historic weekly opposition rallies following Lukashenko's reelection to a sixth term in August, which Western governments have refused to recognise.

Tens of thousands of protesters marched through different neighbourhoods in the capital Minsk on Sunday, chanting "Long live Belarus" and waving red and white flags of the opposition, an AFP reporter at the scene said.

Security forces deployed heavily around the city with armoured vehicles and water cannons before the rally.

Around 70 demonstrators were arrested by the police, according to the Viasna centre for the defence of human rights.

"I can't accept what is going on at the moment," one protester, 22-year-old computer scientist Olga Matchits told AFP.

"I feel like vomiting when I think of the people in power in the country and of the values they are defending."

"They want to drag our dignity into the mud," said another prottester, 72-year-old Alexandre Ignatov. "It's for my dignity, for the future of my children that I have turned out to demonstrate," he added.

Belarusian opposition leader Svetlana Tikhanovskaya, who has claimed victory in the election and is now in exile in Lithuania, called Sunday's protest a step towards a "free and fair Belarus" in a message of support for protesters posted on Saturday.

"We cannot turn the country into a prison if nobody is afraid of the jailers," she said.

Before the demonstration, a dozen metro stations were closed and the mobile network was experiencing cuts, according to an AFP journalist.

About 5,000 people had gathered in the Belarus capital Friday for the funeral of an opposition activist who died of brain trauma after being arrested by police.

Roman Bondarenko, a 31-year-old soldier, died in Minsk after police arrested him following a dispute in a city square that has become a regular meeting place for the opposition.

Belarus opposition are calling for the resignation of Lukashenko, who was re-elected despite accusations of massive fraud.

Since the start of the protest, thousands of people have been arrested, at least four have died and dozens of others have denounced torture and violence during their detention.

Supported by Moscow, Lukashenko, 66, has been in power since 1994 and refuses to leave his post. He has only mentioned vague constitutional reforms in an attempt to calm the protest.