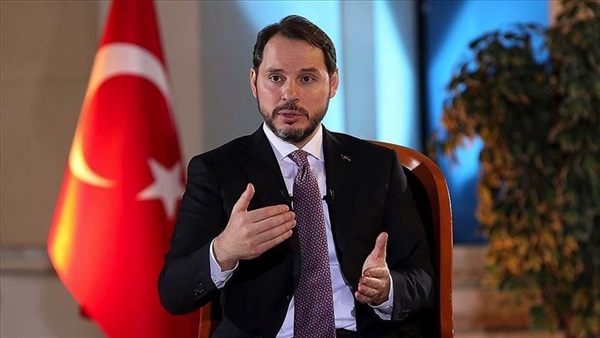 The resignation of Berat Al-Buraq provoked the resignation of The son-in-law of Turkish President Recep Tayyip Erdogan, from the Treasury and Finance Ministry, a few days ago, argued among the ruling Justice and Development Party, which is allied with the right-wing Nationalist Movement Party (MHP), and whether it would reflect the decline in the votes of the ruling coalition, or be effective in solving economic problems.

Who is Berat Albayrak?

Berat Sadik Albayrak grew up in a family of predominantly religious conservatives with weight in the world of politics. His father, Sadik Albayrak, snuck into the world of politics through the gates of journalism after being abused for a long period of time before becoming a political cadre in the Turkish Welfare Party and a member of parliament between 1991 and 1995.

The father’s presence in the corridors of politics allowed him to form friendships with the youth of the party at the time and to consolidate his relationship with a then-young man named Recep Tayyip Erdogan. The similarity of their political and material circumstances at the time helped to cement their friendship, which continues to this day.

The friendship between the father and the current Turkish president was not isolated from the son's upbringing, which coincided with the rise to power of Erdogan, who eventually became president of the country. Berat studied Business Administration at Istanbul University. Then, in 1999, he joined Çalık Holding Company, which works in the fields of energy, construction, and other fields. After three years he was appointed as a financial director in the company’s branch in the United States and soon became the branch manager.

According to a report published in the German magazine Der Spiegel, Albayrak worked during his position inside the company to pass a tax law drafted by his colleagues in Çalık Holding and helped the company enter money it had earned from business outside the country without paying almost any taxes on it.

During Berat's tenure in the United States as CEO of Çalık, Berat approached Esra Erdogan, who was studying at University of California in Berkeley, after taking permission from her father to get to know Berat more. This acquaintance culminated in a legendary marriage and became the station for Albayrak’s new political rise in the corridors of power.

After their marriage, Berat began his ascension to political power by purchasing the newspaper Sabah and the A-Haber channel, which are currently known for their positive coverage of the Turkish president. Later, Berat moved to Istanbul to start working as a political cadre within the Justice and Development Party (AKP) and to run on its lists in Istanbul, as well as to exercise roles and tasks without an executive position. Erdogan even appointed him Minister of Energy in 2015, in a move considered by some to be political favoritism, which was met with much criticism.

Berat soon exceeded the official powers of his position, moving from being a mere energy minister to practically the second man inside the presidential palace after Erdogan. He was found participating in all meetings with Erdogan, especially those that brought him together with foreign heads. He also would talk with the Turkish president about family matters in front of the ministers, criticize other politicians within the party, give instructions to ministers, and tell them how to run their affairs and who should be employed or fired.

According to opponents, Berat’s widespread influence made his criticism by the Turkish media a matter of imprisonment, as was the case of German journalist Deniz Yücel, who works as a correspondent for the German newspaper Die Welt in Turkey and who was accused by the Turkish authorities of having links with a terrorist organization after a news report was published about Erdogan’s son-in-law.

The marriage between Berat and Erdogan's daughter Esra strengthened the rapprochement between him and the Turkish president, such that he became the Turkish leader’s political shadow and entrusted with absolute confidence, granting him powers beyond his jurisdiction as Minister of Energy to become the number two man in the corridors of power.

The evidence of this relationship between the two and the absolute confidence that emerged from the reality of working together in previous years is that Berat was the first to inform the Turkish president of the attempted coup against him by army officers on Friday night, July 15, 2016.

Berat did not only report about the coup attempt, but rather he was the only one of all Erdogan's men who accompanied him that night by designing a plan to thwart the coup while he was with Erdogan in a hotel in the Turkish summer resort of Marmara in southwestern Turkey. Albayrak was the executor of the Turkish president's plan and a guide to him in many steps, such as the joint agreement to reject Erdogan's trip to one of the Greek islands, as suggested by an official.

Albayrak played an active role in opening a channel of communication with the head of the intelligence service, the chief of staff and then-Prime Minister Binali Yıldırım, as well as suggesting that he make a televised appearance, which was a factor in curbing the influence of the coup elements.

Berat's statements were portrayed after the failure of the coup attempt, and he played a major role in preparing lists of the names of officers and elements loyal to Fethullah Gulen against whom decisions were issued to refer them to trial, in addition to his subsequent roles in proposing alternative personalities to these names, indicating the size of the powers granted to him to restructure the security services.

He also urged Erdogan to accelerate the adoption of more stringent measures so that every participant in the coup or any supporter and adherent of Gulen's ideas could be imprisoned and dismissed from his job. Erdogan's son-in-law is one of those affiliated with the hawkish wing inside the presidential palace, adopting more extremism towards anyone who contradicts the views and policies of the ruling authority.

Albayrak’s wide presence and influence and his role in designing a plan with Erdogan to confront the coup made him always the subject of accusations from Erdogan's opponents in any violence exercised against them or any violations of the constitution. It also happened when IYI Party leader Meral Akşener accused him of having contacted officials in the official Anadolu Agency and asked them to announce Erdogan's victory by 52% at the ninth hour of the presidential election night.

According to a report issued by the German magazine Der Spiegel, Erdogan's inclination towards stricter policies against opponents at home and abroad is backed by his son-in-law, who believes that Erdogan's push towards repressive policies will not make the European Union take escalating stances towards him.

According to some, the previous facts, in addition to Berat’s role in thwarting the coup plan, strengthened his influence inside the ruling palace, to become the ultimate commander and push for stricter policies with every official who deviates from the official line that he defines, and he imposes wide control over their movements, as he did against Interior Minister Suleyman Soylu, a strong rival within the party, when he ordered his phones to be tapped, as reported by the Turkish newspaper Cumhuriyet.