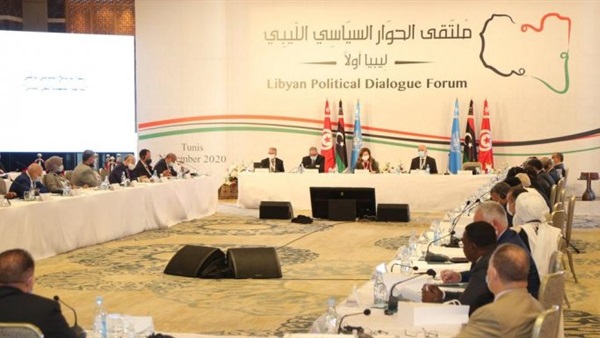 The Libyan Political Dialogue Forum in Tunisia is witnessing a shift in the management of the decisive stage in Libya, as the Tunisian forum is seen as a unique opportunity to return the neighboring country to the path of unity and peace. This is the strong desire expressed by Tunisian President Kais Saied at the opening of the meeting, as he called for the creation of a new legitimacy that stems from the will of the Libyans, adding that it will not remain a mere event, but rather will witness a political transformation that will have the upper hand in shaping the features of the next political phase.

After a ten-year eclipse due to the vicissitudes of the revolution, Tunisia has reappeared significantly on the Libyan scene by hosting the Libyan Political Dialogue Forum on its soil, where the Tunisian president stressed that there is no reason to exercise tutelage over the Libyan people in any capacity or in any way, rejecting any division “which is a threat not only to Libya but to the entire region.” Moreover, Saied insisted on the necessity of overcoming all difficulties and obstacles on the road to a peaceful political settlement without outside interference.

After reinforcing the front lines near the strategic coastal city of Sirte, the two sides began ceasefire talks under the auspices of the United Nations, as UN Special Representative Stephanie Williams reaffirmed that they had made further progress in implementing the national ceasefire agreed to last month and established a headquarters in Sirte to work out the details. Williams hopes that the political talks in Tunisia will bear fruit in the development of a roadmap for elections as soon as possible, in addition to the establishment of a unified authority throughout the country, where it can manage the process successfully, meaning that the participants pledged not to play any role in a new transitional government.

The talks are taking place with 75 participants selected by the United Nations to represent a range of political opinions, regional interests and social groups. The main warring parties are discussing how to implement the truce agreed upon in Geneva. Williams affirmed that “the road will not be paved with roses and will not be easy.” She considered that a meeting in Tunis was the “best opportunity” to proceed with a serious solution to the Libyan crisis.

According to the draft agreement that will be issued at the Tunis meetings, the forum will follow up the implementation of its decisions in coordination with the United Nations Support Mission in Libya, provided that it has a general secretariat consisting of five members chosen by itself. It will also follow up and evaluate the institutions concerned with implementing the agreement on a semi-annual basis and determine the extent of commitment and efficiency of the performance of these institutions in carrying out the tasks assigned to them in the preliminary stage and within the time limits specified for that, as well as following up on what is agreed upon in the government's work program. It will have the authority to propose the necessary treatments when needed for the results of follow-up and evaluation of all institutions mentioned in the agreement, including the replacement of leaderships that take over the management of these institutions.

The coming period will witness the introduction of amendments to the constitutional declaration in accordance with the provisions of the political agreement, within a period not exceeding 30 days, as legislation ending the transitional stages will be issued within 30 days, while the rest of the legislation required by the government will be issued within a period not exceeding 14 days.

Observers believe that the new body will have broad powers that go beyond the powers of the House of Representatives and the High Council of State, as the most important role will be to follow up the implementation of its decisions, including the formation of the new Presidential Council, the government of national unity, and overseeing appointments in political and sovereign positions. It will be the declared partner of the United Nations and regional and international powers in leading the country to the stage of stability.