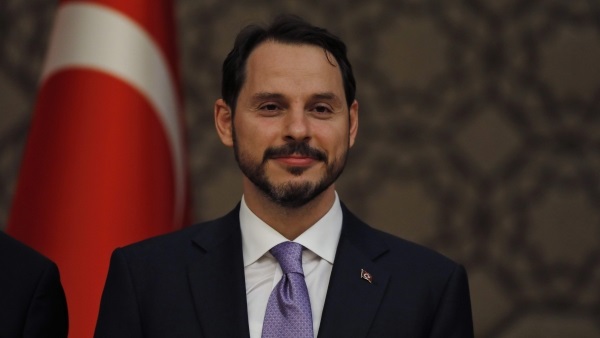 Berat Albayrak, son-in-law of Turkish President Recep Tayyip Erdogan, assumed his duties as Minister of Treasury and Finance on July 9, 2018. At that time, the price of the dollar was 4.53 Turkish lira. Now, after more than two years has passed, he decided to resign, leaving his post after the price of the dollar reached 8.57 lira, in a collapse unprecedented in the history of the Turkish national currency. Inflation increased by 33% due to Albayrak’s inexperience, as his only qualification is being the husband of Erdogan's daughter Esra.

Albayrak was born on February 21, 1978 in Istanbul. He is the son of a well-known businessman, Sadik Albayrak, and he has one brother older than him, Serhat Albayrak. His family originates from the northern city of Trabzon.

He completed his university education at the Faculty of Economics (Department of English) at Istanbul University, and in 2002 he obtained a master's degree in economics from Pace University in New York. He then obtained a doctorate from Kadir Has University after submitting a thesis entitled “Generating Electric Power Through Alternative Energy Sources”.

Berat married Esra Erdogan, the daughter of the Turkish president, in 2004, when Erdogan was prime minister. The wedding was attended by prominent figures in the Justice and Development Party (AKP) at the time, including former Foreign Minister Abdullah Gul and former Parliament Speaker Bulent Arinc.

Albayrak entered parliament from the gate of the AKP in the June 7, 2015 elections. He was appointed as Minister of Energy in the government of former Prime Minister Ahmet Davutoglu and continued in his position during the period of Prime Minister Binali Yıldırım's government.

Then, in 2018, with the establishment of the first government under the presidential system, Erdogan appointed Albayrak as Minister of Treasury and Finance. With the beginning of his new position, Albayrak received many criticisms, including his assumption of this sensitive political position, which, according to his opponents, created an increasing concern about the country's economic environment, especially since the offers made by the minister to representatives of the global economy and investment were not convincing.

Albayrak won the title of “young dictator” and Turkey's second man, after he became Erdogan’s shadow, whether by walking with him on his important moves or sitting next to him in fateful meetings. His fangs then appeared when kicking former Turkish Prime Minister Ahmet Davutoglu outside the political circle so that he was not allowed to run against Erdogan, especially after Davutoglu crossed the red lines and became a rising star when his popularity increased during his leadership of the AKP after Erdogan.

The Turkish president’s son-in-law played a major role in the scripted July 2016 coup to slaughter the dissenting voices and control the institutions that might play a role in educating the masses to end Erdogan's rule. It was not long before the security services loyal to the president launched large-scale campaigns that targeted military men, state employees, journalists and media workers, exercising all kinds of repression without anyone criticizing him, even in his European surroundings, as things were seen at the time as an attempt to maintain security inside Turkey. But documents revealed Albayrak’s involvement with ISIS in smuggling terrorist oil to Turkey.

Albayrak tried to remedy his economic failure by blackmailing Germany through the refugee issue, and his scandals became heavy material for the media. They addressed his failures, mocked his weak qualifications, highlighted his suspicious relations with Israel, and wooed him in Tel Aviv by sitting down with Israeli Energy Minister Yuval Steinitz in order to carry out negotiations for Turkish state-owned oil and gas company BOTAS and to extend a gas pipeline from Israeli fields through Turkey for transfer to Europe.