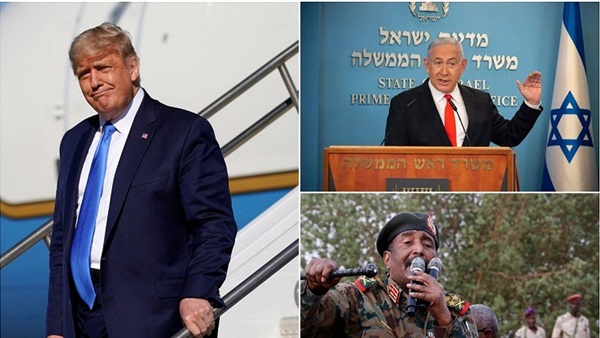 With the succession of American sanctions against the mullah regime, Sudan’s agreement with Israel represent a strong blow to Tehran, which was exploiting Sudan to support terrorist operations, as analysts believe that Khartoum taking the decision to conclude a peace agreement with Tel Aviv ends Iran’s dreams of turning Sudan into a forward base to help expand Tehran’s influence.

The Sudanese Ministry of Foreign Affairs officially announced that Khartoum and Tel Aviv had reached a decision to end hostilities, normalize their relationship, and start economic and commercial dealings.

Writer and political analyst Oded Granot said in an article that “Sudan's decision to normalize ties with Israel conveys a divorce from three obstructions that had suffocated this vast country and threatened to ruin it completely.”

Granot explained that one of the barriers was Iran’s efforts “to turn Sudan into a forward operating base to help them expand their spheres of influence.”

The newspaper Yedioth Aharonoth earlier quoted the Israeli Ministry of Intelligence as saying that one of the most important things that Israel will benefit from after announcing a peace agreement with Sudan is “preventing the smuggling of weapons via the Sudan-Egypt-Gaza route, preventing the positioning of entities hostile to Israel on its territory, and the possibility of thwarting the establishment of naval bases for parties hostile to Israel, such as Iran, on the shores of the Red Sea.”

An investigative report by Nordic Monitor published last year suggested that “despite the Sudanese transitional government’s declaration of its observance of all international obligations that were made by the Bashir government, the previous Sudanese regime’s agreements, whether intelligence and military or related to leasing Suakin Island on the Red Sea, are candidates with a high priority of cancellation.”

According to Granot, another barrier that Sudan got rid of is extremism. “The lengthy period of time under the rule of the Mulsim Brotherhood and former tyrant Omar al-Bashir pushed Sudan toward religious fanaticism that included, among other things, providing refuge to al-Qaida and Osama Bin Laden, and providing military aid and training to Hamas and Hezbollah terrorists,” he wrote.

As for the third obstruction, it related to the “negative image of Israel, which Bashir’s regime cultivated,” but this “gradually evaporated after his overthrow.”

Israeli analysts are unanimously agreed that the declaration of the peace agreement between Israel and Sudan is “a success story for both parties, with no loser, as Sudan got an economic rescue from huge debts amounting to $60 billion and the prospect of returning to the United Nations family after removing its name from the list of countries supporting terrorism.”

Brigadier General Yossi Kuperwasser, a prominent researcher at the Jerusalem Center for Public Affairs (JCPA), said, “It is important to remember that Sudan entered into a peace agreement with Israel out of its own interest and not out of love for Israel. Sudan’s primary interest is to remove its name from the list of supporters of terrorism.”

However, he added that Sudan “is a country that has not supported terrorism for a few years, and this is a development that deserves to be appreciated.”

According to Kuperwasser, “Israel has an interest in strengthening the pragmatic-moderate regime in the Arab world to confront extremist regimes.”

The US Treasury Department announced expanding sanctions on Tehran and the inclusion of Iranian Oil Minister Bijan Namdar Zanganeh on the US blacklist.

The Treasury added that other Iranians were also sanctioned, in addition to several Iranian companies and institutions, including the Ministry of Oil.

It noted that the constraints included two oil tankers sailing under the flags of Honduras and Panama that are linked to the National Iranian Oil Company.