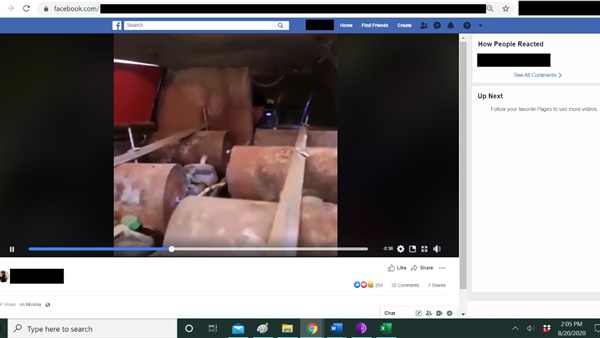 The Counter Extremism Project (CEP) provides a weekly report on the methods extremists use to exploit the internet and social media platforms to recruit followers and incite violence. Last week, ISIS spokesman Abu Hamza al-Qurashi published a video statement via the organization’s Al-Furqan Media Center calling for an increase in terrorist acts, especially attacks in Saudi Arabia against American and European interests, and criticizing the United Arab Emirates and Bahrain for establishing diplomatic relations with Israel. The Instagram account of the pro-ISIS French-speaking propaganda group Infos al-Nour was among the sites that Permanent Electoral Center researchers identified as links to help spread the statement.

In addition, the ninth issue of the pro-ISIS online magazine "Voice of India" was published on several websites and contained articles stating that ISIS was practicing the only correct version of Islam, providing advice on recruitment, and criticizing Middle Eastern countries that negotiate with Israel, and condemning the Taliban for negotiating with the Afghan government. Also, CEP researchers have identified several ISIS propaganda material on Facebook, including a pro-ISIS blog created in May with more than 2,200 likes/followers, which recently published ISIS leadership data and propaganda images, including a bloody photo of the French teacher, Samuel Paty, who was beheaded.

Meanwhile, ISIS's Amaq News released a video that it claimed showed fighting with Nigerian security forces near the village of Duska in Borno State, including footage of an ISIS fighter shooting a dead or wounded man.

In addition, the Telegram channel on white supremacy of more than 3,200 members has downloaded a brochure on explosives and firearms intended to inspire and provide guidance on fighting a race war. The Telegram channel, notorious for neo-Nazi acceleration removed, is back on the podium after previously calling for violence before the 2020 elections, urging attacks on law enforcement officers and Jews, and routinely praising mass shooters.

On October 18, ISIS spokesman Abu Hamza al-Qurashi issued a statement via the al-Furqan Media Center calling for an intensification of terrorist acts. He also addressed ISIS supporters in Egypt, Yemen, Syria, Iraq, Somalia, Nigeria, Mali, Burkina Faso, Congo, Kenya and Chad, calling on them to continue fighting, and he specifically called for attacks on prison facilities to release ISIS members held there and congratulated ISIS fighters in Afghanistan for attacking a prison in Jalalabad. Qurashi also praised ISIS operations in Mozambique.

In addition to Telegram, RocketChat, and the ISIS propaganda site, audio files for the statement were uploaded to at least 13 other sites, including Mail.Ru, Spreaker, Internet Archive, Ipfs.io, Soundcloud, MediaFire, Download.Gg, and Dopapk. After about 48 hours, the audio file was still available on at least seven sites.

The Permanent Electoral Center researchers also found an Instagram account for the French-speaking ISIS propaganda group Infos al-Nour. The account posted links to the French translation of the ISIS spokesman's speech that was released recently. The account was created on October 20 and deleted soon after researchers reported it.

The ninth issue of the online pro-ISIS magazine "Voice of India" was published on several websites on October 19. It aims to attract Muslims in the Indian subcontinent and beyond. The ninth issue contained an article by a supporter of ISIS in the Maldives, stating that ISIS was practicing the only correct version of Islam and providing advice on recruitment. Another section criticized the Middle East countries negotiating with Israel, and likewise condemned the Taliban for their negotiations with the Afghan government. The ninth issue also contained the story of three individuals who traveled from India to Afghanistan to fight ISIS. The magazine concluded by referring to the execution of Samuel Paty in France, praising violence against those who defame the Prophet Muhammad (peace and blessings be upon him).

Links and PDFs were posted via Telegram, RocketChat and Hoop. The online magazine has been released on at least eight sites, including MediaFire, Internet Archive, Cloudflare IPFS, Mega.Nz, Siasky.Net, Telegram bot Tlgur.Com, Top4top, and Siacdn.Com. Almost three days later, it was still available on seven websites.

European Center for Central Elections researchers identified several bits of ISIS propaganda on Facebook in the week of October 17-23. An example is a pro-ISIS blog created in May with more than 2,200 likes/followers and the posting of recent leadership statements and propaganda images for ISIS, including a bloody photo of the beheading of French teacher Samuel Paty. Another blog page was found with more than 400 likes/followers and included propaganda newsletters for ISIS and written statements translated into Bengali. The blog also contained links to advertisements on other websites. Researchers found an additional Facebook blog page with more than 4,200 likes/followers that included the group's propaganda news releases, official ISIS audio data, and short videos taken from official ISIS propaganda videos.