ISIS links prison break in DRC to speech from its spokesman 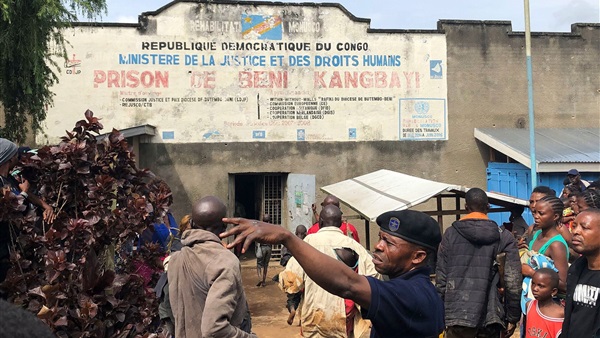 In its official media statement regarding yesterday’s massive prison break in the Democratic Republic of the Congo (DRC), the Islamic State has directly linked that operation to a recent speech made by its spokesman, Abu Hamza al-Quraishi.

The Islamic State begins its statement (above) by summarizing yesterday’s events, which were carried out by its local branch, the Allied Democratic Forces (ADF). At least 1,300 inmates were freed by the jihadist group in the town of Beni in northeastern DRC.

Perhaps demonstrating the ADF’s provision of accurate reporting from the ground to Islamic State’s media apparatus, the statement correctly notes that the group targeted two military bases near the prison not just one base as widely reported in the media.

Most importantly, however, it adds that the raids were carried out as part of the newly announced “Answer the Call” campaign.

This moniker is in reference to a recent speech made by the official Islamic State spokesman, Abu Hamza al-Quraishi. As part of his Oct. 18 speech, al-Quraishi praised the Islamic State Khorasan Province’s Aug. 2 prison break in Jalalabad, Afghanistan.

In referring to that assault, al-Quraishi further called on members and supporters to conduct similar operations around the world.

It is not just the Islamic State tying yesterday’s prison break in the DRC to al-Quraishi’s call to action. Shortly after the attack, the ADF directly linked its operation to the speech.

In a message regarding the attack on its private social media channel, the ADF acknowledged al-Quraishi’s recent speech with that “Abu Hamza al-Quraishi said the Khalifah [referring to current Islamic State emir Abu Ibrahim al-Hashimi al-Quraishi] advises all mujahidin to set their eyes on breaking the walls of prisons and free our brothers.”

The statement, shared with FDD’s Long War Journal by the Bridgeway Foundation, also added that “he [Abu Hamza al-Quraishi] said the conquest over lands comes after prisons are destroyed and brothers are set free to join hands in destroying the Tawaghit [tyrant] oppressors and their fortifications.”

Both groups have now drawn a direct line between yesterday’s prison break and al-Quraishi’s recent address. It is clear that this is part of an ongoing trend in which Islamic State leaders have urged more jailbreaks in speeches and messages which have then correlated with attacks on the ground.