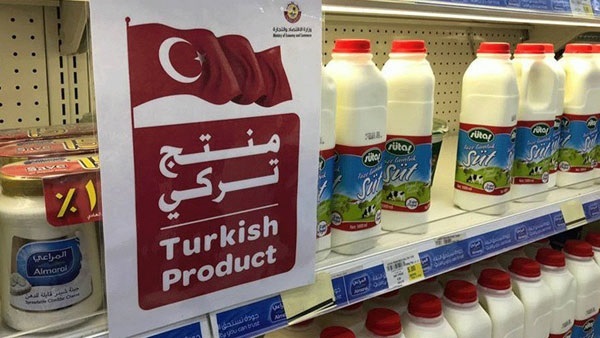 Calls for boycotting Turkish goods have morphed into a real public campaign in Saudi Arabia from a mere hashtag on Twitter.

Commercial shops across Saudi Arabia put banners on their fronts in which they say they do not sell Turkish goods any more.

The "Boycott Turkish goods" hashtag has become the most popular in Saudi Arabia, in response to threats by Turkish president Recep Tayyip Erdogan against Gulf states.

The campaign also comes in response to continued hostility from Turkey to Saudi Arabia and Ankara's unrelenting interference in the affairs of Arab states.

Turkish traders are starting to feel the heat from the campaign.

The largest eight business groups in Turkey released a statement in which they expected the Saudi boycott to negatively affect the international supply chain.

This means that the boycott might have its deep impacts on decision-making in Turkey.

The campaign is apparently also seeping out of Saudi Arabia and into other countries, including Morocco and Greece. Other Arab countries, such as Egypt, the United Arab Emirates, Bahrain, Sudan and Jordan are expected to follow in the footsteps of these countries. This will destroy the prospects of Turkish foreign trade and open the door for public anger in Turkey.

The scope of the boycott in Saudi Arabia is expanding and now including products produced by international companies in Turkey.

Calls for suspending Saudi investments in Turkey are accompanying the campaign.

Saudi investments in Turkey span a large number of sectors, including the real estate sector, the communications sector, the energy sector and the industry sector.