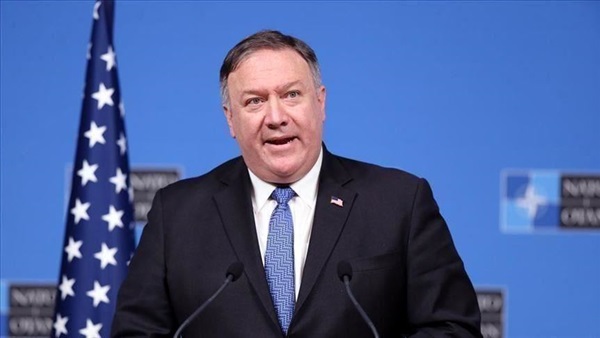 U.S. Secretary of State Mike Pompeo lambasted Turkey’s military support for Azerbaijan in fighting against Armenian separatists in the disputed enclave of Nagorno-Karabakh, saying it was detrimental to resolving the conflict.

“We now have the Turks, who have stepped in and provided resources to Azerbaijan, increasing the risk, increasing the firepower that’s taking place in this historic fight over this place called Nagorno-Karabakh,” Pompeo told U.S. broadcaster WSB Atlanta in an interview, according to an e-mailed transcript sent by the State Department.

Turkey has underscored its firm support for Azerbaijan in clashes over Nagorno-Karabakh, which is located within Azerbaijan’s borders but controlled by ethnic Armenians, which erupted on Sept. 27. Turkish President Recep Tayyip Erdoğan had said his country was ready to do whatever was necessary to eject Armenian forces from the region.

Since then, France, Russia, Iran and Armenia have separately accused Turkey of sending battle-hardened Syrian mercenaries who fought in the Syrian and Libyan civil wars to bolster Azeri troops. Armenia has also repeatedly accused Turkey of providing air support and on Thursday said the country was blocking flights carrying humanitarian aid from using Turkish airspace.

“The resolution of that conflict ought to be done through negotiation and peaceful discussions, not through armed conflict, and certainly not with third party countries coming in to lend their firepower to what is already a powder keg of a situation,” Pompeo said.

Azerbaijan’s defence purchases from Turkey surged in the third quarter of the year, according to Reuters. Turkish arms exports to Azerbaijan rose to $113.5 million in the July to September period from $880,000 in the previous three months, it said.

Speaking to Turkish broadcaster NTV on Thursday, Azeri President Ilham Aliyev said that none of the region’s problems could be solved without Turkey’s assistance. “This is true, whether people like it or not,” he said.

Aliyev said that he did not rule out Turkey establishing a military base in the country, but there were no such plans at present.

“If such a need arises, if Azerbaijan is in danger, Turkey is our ally and we can take advantage of these opportunities,” he said.

Aliyev said territorial advances by the Azeri army meant it was in control of two of Karabakh’s five major regions. Azerbaijan would take all five unless Armenia agreed to withdraw within a specific timeline, he said.

Fighting in the enclave is persisting even after Russia brokered a ceasefire between the two countries at talks in Moscow last week. Russia is the dominant player in the Caucasus region and maintains a security pact with Armenia, a close ally. The agreement does not however cover Nagorno-Karabakh. Moscow has also cultivated warmer relations with Azerbaijan in recent years. It sells weapons to both sides.

Russia and Turkey agreed that a peaceful resolution was the only option to end the conflict in a phone call between Russian President Vladimir Putin and Erdoğan on Wednesday, according to the Kremlin. Moscow is sceptical about a recent proposal by Turkey to allow it to join peace talks on the side of Azerbaijan while Russia represents the interests of Armenia, according to Russian state-run TASS news agency.

"Azerbaijan and Armenia have mutual trust in Russia as a balanced partner while (Armenia’s capital) Yerevan has no such confidence in Ankara,” Russian newspaper Izvestia cited Vice President of the Armenian Parliament Alen Simonyan as saying.

“It’s wrong to try to create a four-way format in which Russia will side with Armenia and Ankara with (the Azeri government in) Baku,” Simonyan said.